Day 4 - Did not go as planned. Missed my spinning workout and had to go out to lunch with business colleagues.

The good.  Breakfast - had my smoothie and it kept me filled. Lunch - even though I ate out I ordered water and a cobb salad. I even went so far to get a light vinaigrette dressing as opposed to the Ranch or French I usually get. Ok - I usually do not get French dressing. They apparently do not carry it at restaurants in Colorado because I like it.  You can get a freaking marijuana brownie in this state but you can't get French dressing.. Dinner was cereal and toast..not the best choice since there was no protein to speak of.  Also did not need all of those carbs before bed.

Another good. Jared at  Kompetitive Edge hooked me up with some new goggles to replace the ones that gave me such a problem.  I got the Tyr Special Ops.  They are polarized so I can use them for outdoor swimming..in about 6 months.  I have not tried them in the pool yet but they did awesome driving around town today..may just use them instead of my regular sun glasses.  I kind of looked like Vin Diesel in Pitch Black..if Vin had been sick for six months..lost all his muscle mass and then tried to recoup it with frequent trips to taco bell for the Doritos Tacos. 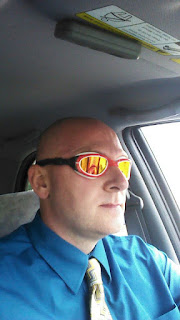 And yes..I did buy them because they were Badger colors.  That is just the way I roll.

Being it was election day Jared and I discussed our opinions and agreed that this country was lucky no matter who was elected since both candidates were immensely qualified for the job.  We also both wanted to tell all our facebook friends thank you for the enlightened and informative political posts they have been putting up the last 6 weeks.  Neither of us knew that Romney was going to actually require all women to register their uterus with the federal government...nor that Obama will require all working Americans to physically sign over their checks to welfare recipients at the end of each week.  I could have been so uninformed if it weren't for facebook.

I got home to watch the election and was reminded by my 4 year old daughter..Ink Masters is on tonight.  Which is weird since she is not allowed to watch the show.  What is even weirder is my addiction to it since I do not have any tattoos nor would ever get one and have no idea why anyone would want one.  I think I like the watching it because every one of the "artists" is a train wreck in some way or another.  And who doesn't like a show where a guy has to tattoo a girl with a bird shooting flames out of her....  Yeah there was a lot of blurring going on during that episode.

(This is a long way of saying..I missed my spinning workout)

The bad..missed my spinning workout and didn't tell Jen.

Missed breakfast..however when I got to work I stole someones yogurt out of the fridge and ate it.  I then went and taped the cover back on the yogurt container and put it back in the fridge.  Also went out to lunch to discuss business..Had another salad (grilled chicken and veggies) and water.  Yeah..apparently I am turning into "that" guy.  Pretty soon I'll be driving a Prius. Dinner was after I worked out and consisted of cottage cheese..with fruity cheerios in it.  (I did not have any real fruit readily available so used the next best thing)

I went to Ballys after work to run on the treadmill.  I love Ballys..the personal trainers are usually either looking at themselves in the mirror or helping the "hot" chick in the class with her lunges as the fat guy hyper-extends something resulting in a bone that begins protruding in an area it shouldn't.  There is no shortage of entertainment at that place.  And while I was on the treadmill I watched one particular guy doing the weight machines.  He did exactly 2 sets of exercises on 2 different machines during the 45 minutes I ran.  However he did manage to scare off 3 different women working out in the same area.  I don't know why..I thought the wife beater t-shirt and orange and blue zubaz were rockin.

My nutrition was not horrible today but could have been better.  The running and lifting went well.

The Bad today.. I lost one of my new shoes.  I packed it this morning but when I got to the gym there was only one shoe in the gym bag.  Luckily my truck is a pig sty and I had two other pairs of shoes in it..so I walked out of the gym in my socks..grabbed another pair of shoes and did my workout.  I was tempted to walk around the gym in my one red crosstrainer but figured the reference to the 80s Tom Hanks movie would be too obscure for most.  Thus instead of laughing at the obvious joke people would have just pointed at the pathetic old guy with one red shoe.

I still have no idea where my shoe is.