I can't complain about the whole of 2011.  I completed my first half ironman and competed in IM Wisconsin. I also lost 45 pounds.  The Packers won the Superbowl and I met a lot of new friends.  However, the last two weeks of 2011 kicked my butt and I am glad we are in 2012.

My Christmas vacation started with my flight back to Wisconsin, where I went immediately from General Mitchell Airport to the hospital to meet my Dad and family at the ICU. My mother had gone into a deep comatose state and the doctors did not think she was going to come out.  I volunteered to spend the night in the room with her so the others could go home and sleep.  Of course, Christmas Eve morning my father came back into the ICU and my mother heard his voice and immediately started talking to him..what the hell?  Another miraculous recovery by my mother.  Christmas Eve was kind of a blur after that. I had been up for 36 hours straight and ended up falling asleep and missing the evening parties.  We were able to spend Christmas with my family at the hospital since my mother had been moved to a regular room the next day.  Also was able to spend time with my wife's family.  The in-laws even bought me the Nathan Hydration Vest I had been wanting.  I spent the rest of the week visiting family and spending time at the hospital.  A fairly stressful week but I was able to spend time with family.  My mother's illness even had the unintended consequence of bringing my brother and his wife to Wisconsin for Christmas.


My wife, daughter and I began to drive back to Colorado on the 30th and entered Colorado on the 31st.  The winds were horrific. In fact we saw signs that said the highway was closed to high profile vehicles.  Apparently one semi truck driver could not read since as we started to pass him the back wheels of his rig came off the ground.  I slowed down just in time to watch his whole rig flip over.  Once the truck stopped I parked our car and ran to the truck..which took some doing in the wind. I got covered in diesel fuel as I tried to get to the cab to see if the driver was ok. He was moving and finally got up. Unfortunately he could not get out because the winds were so strong he could not open his door. I climbed on the rig and propped the door open so he could get himself and his stuff out.  I looked down and there was some guy on his cell phone down below but he would not come closer to help the driver down or grab any gear.  Some people are just worthless. I guess he just wanted to see what was happening.  Luckily the police and fire showed up within minutes and they were able to get traffic moving within 15 minutes.  When we started moving my four year old daughter said.. "He did a damn good job flipping that truck" My wife and I couldn't even scold her we were laughing so hard.


When we got home three hours later we pulled up to the front of the house and saw our gutter hanging off as well as the soffit and pieces of roof.  Ugh.  Once inside we found a mirror shattered on the hardwood floor with glass pieces everywhere.  I went to the computer to look up my insurance and the unit would not power up. Needless to say we did not celebrate New Year's Eve, we were just ready for 2011 to be over with.

However 2012 did start well. I flew out in the morning to meet my brother and his wife in California for the Rose Bowl.  Even though our beloved Badgers did not win it was a great game and we met a lot of cool people, hung out with old friends and enjoyed the weather for three days. 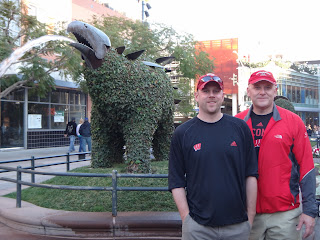 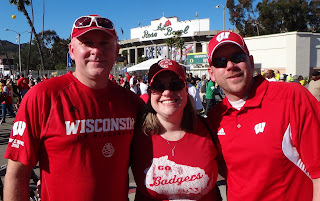 2012 is now in full swing.  My wife started a new job and my training has officially begun.  One thing I learned the last two weeks of 2011 is that you need to make some time for yourself to relieve stress. Whether it be everyday stress or from chaotic events.  I did not work out and dealt with the stress by finding comfort in my favorite foods in Wisconsin. This of course has resulted in me getting up to 225 lbs again.  (Last year at this time I was 245...so I am still ahead of the game.)  My first swim of the year was yesterday at lunch. I looked for every reason in the world not to go.  I did end up going and felt so much better.  My first trainer ride was this evening and my first run is tomorrow.  It really is amazing how once you start the training and good eating habits that they start to snowball and you look forward to the next workout instead of dreading it.  I am also looking forward to getting back together with my training buddies who I have not seen in a month or two.