I relayed the details of my latest triathlon to one of my trusted advisers and friends.  I waited in anticipation for any sage wisdom or possibly some sympathy for my DNF.  What I received instead was an obvious observation. "You're an Idiot" Not something I could really argue with.

I had flown out to Palm Springs to do the HITS Championship.  I had signed up with my friend Angela Lee to do the 70.3.  Jen Roe was going to do the Sprint.  I had actually put time into training..not a lot of time..but time.  I had not lost weight though, which I knew was going to hurt me if the weather was hot. However, the race was in December and thus it should be cooler.  (Hmm Palm Springs is in the middle of a desert...I'm an Idiot)  My first indication that Palm Springs may not be that cool is the fact that the terminal does not have a freaking roof.  Apparently it rains once a year. 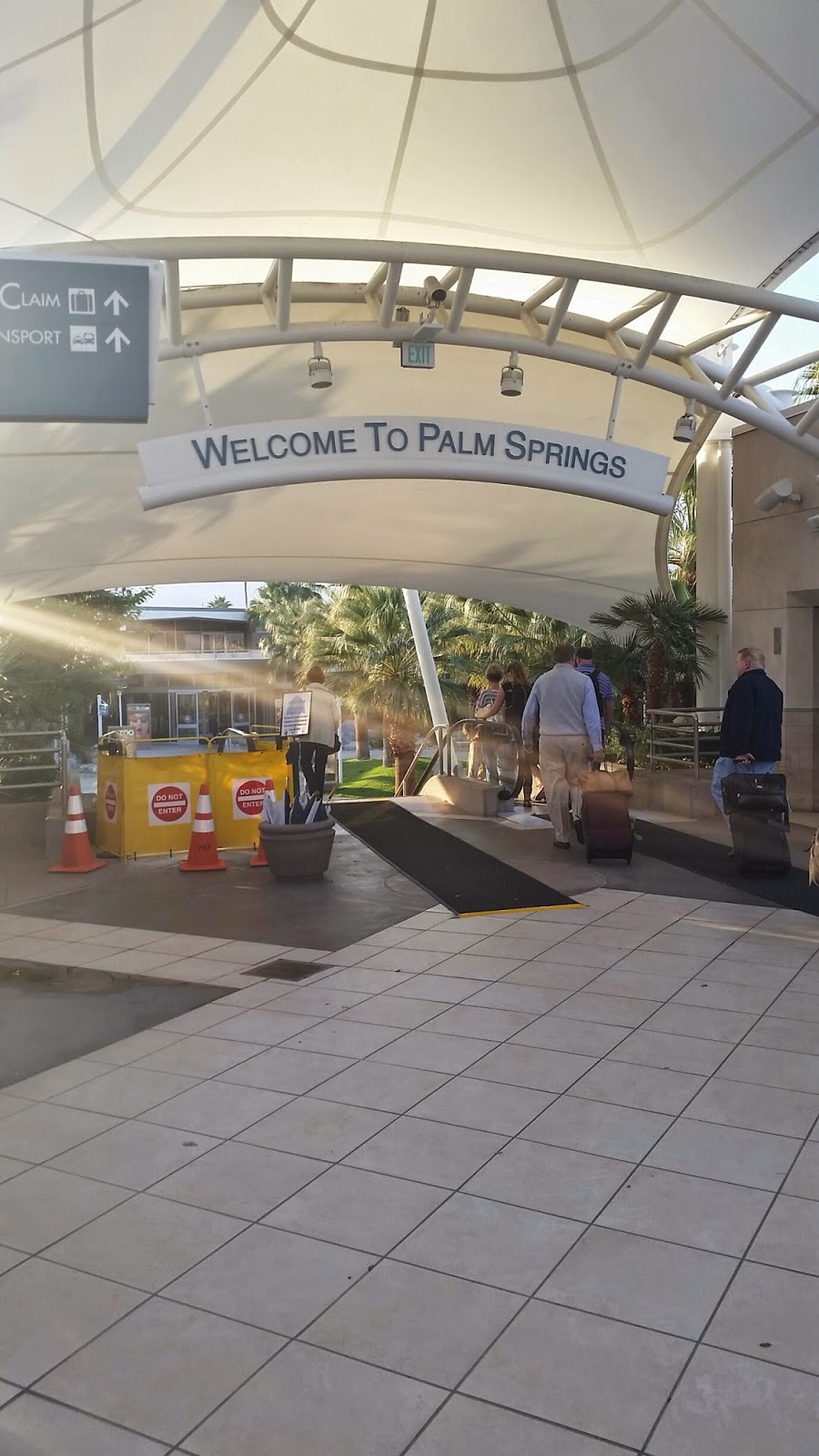 But before I get into all of the observations and facts that tend to prove the hypothesis that I am an idiot..let's rewind a bit and look at what I did right. Based on my past performances I know that I tend to possibly sweat a little more than other people.  Thus we scientifically figured out exactly how much I did sweat.  I tend to sweat between 48 ounces (low HR and temps) to 72 ounces (high HR and temps) per hour.  So roughly 1.4 to 2 liters per hour.  I then had my sweat tested which showed that I lose approximately 1180 mg of sweat per liter.    It means I lose between 1652 and 2360 mg of sodium per hour.  Now..the 1.4 liters of fluid and 1180 mg of sodium are high numbers but don't look that high..until I look at the total loss over the span of a race. So over an 8 hour time span I could actually lose 16 liters of fluid and 18,880 mg of sodium.  So now that I actually look at these numbers..I possibly could be an idiot for racing a 70.3..in the desert.


In the positive column..I did receive advice from my friend and nutritionist Dina who works for fuel4mance in Denver.  I also received advice from Allen Lim, Ph.D. founder of Skratch.  He suggested that I use their hyper hydration drink mix which has about 1700 mg of sodium per serving.  His crew put on a seminar at Kompetitie Edge where they taught us how to make portable food for the bike.  Angela actually made the rice/pbj.  I cannot recommend these portables enough.. The white rice and protein are perfect to eat..very light tasting..easy to eat on the bike..and perfect quick digesting calories.  The hyper hydration should only be used by guys like me that have serious sweat and sodium problems.  I was warned it was going to taste horrible..but the sodium was actually very subtle.  (However this is coming from a guy who adds salt to mcdonalds fries and hamburgers...so take this advice with a grain of salt..or 1700)


Anyway..I thought I had my nutrition at least under control.  So I packed my crap up and headed to the desert.  Angela Lee picked me up at the airport and we drove to the Hits HQ to help put packets together.  And to be fair to Angela..She totally kept up her end of the bargain as far as any Asian stereotypes regarding driving.


I don't know what I expected from the Palm Springs area..but basically it is a desert wasteland with a few meth houses and wandering mad max nomads surrounding the most beautiful gated communities and golf courses.  After only 12 hours there I was really hoping that the geriatrics driving their faux BMW and Mercedes golf carts down the streets would actually be hunted down by roving bands and tied to the hoods of desert dune buggies..Or that at the very least we hit one or two with the mini cooper we were driving. Unfortunately none of this happened.

Angela and I spent the evening gossiping and doing girl talk. The next day we were joined by her stud muffin Dave and Jen flew in that following evening.  The night before the race the kitchen was a mess with with rice patties, Skratch drink mix, cliff blocks, foggle, goggles, Gu Gels and Hoo Ha Ride Glide. DO NOT get those last two items mixed up..I'm not telling you that I know this from personal experience..but it does not end well on either end if you do mix them up.   I learned many things that night preparing for race day...but the most important one was that Angela truly loves me. She didn't even blink an eye when I asked her to shave my shoulders since I was sure that the hair that had migrated from my head to my back would slow me down while I was in aero positon.  And even lied to me and said that the hair was white from the sun and not grey.  I'd kill for her now. And it is possible I may have already.

Race morning Dave, Angela and myself went down to the race site and suited up for battle. Dave and Angela actually looked like triathletes..I of course looked like a moving billboard for the Badgers..both in content and girth.


We went down to the swim start and with 650 of our closest friends we waited for the starting bell..and off we swam..or some of us did.  The water was so shallow on the first leg that a lot of people actually walked.  I can tell you that it is not very comfortable swimming ..finding your pace and then ramming not a person who is stopped and standing in the water in front of you.  What is even less comfortable is getting to the deep part of the lake, finally getting your rhythm and running into someone head first.  I know this first hand.  Someone had crossed the buoy line and swam into the oncoming swimmers..lucky for me I was the one who found him.  I honestly thought I had broken my nose...which honestly would not have been all bad..and stopped in the water for 30 seconds thinking there would be blood everywhere..but there wasn't. I immediately had a headache but finished the swim leg..a little slower than I was hoping..but I was done.   I then ran (walked) to T1 and hurriedly (nonchalantly) changed into my bike stuff. Dave was gone but Angela's bike was still there. Since Hits provides stools at T1 I took full advantage and sat down and made breakfast before heading out on the bike. My head was still hurting.


The bike was very scenic..if you like sand..and wandering desert nomads. But it was flat. I stayed with my hydration plan and hammered for the first 15 miles.  I then saw Jen working the first aid station and stopped to say hi..and also eat and drink.  About 5 minutes later Angela came flying by..so I got back on my bike to stay with her.  I almost immediately felt very bad.  My head hurt..I couldn't keep up and then I had to pull over because I was nauseous.  I kept going on the bike but slower and slower. and then I was on the ground. I have no idea how.  I took a few minutes got back on the bike and made it back to T1.  I was done.  I felt so bad I found the EMTs and they wanted to take me to the hospital. They thought I may have had a concussion during the swim. I just wanted to lay down.  So after checking me out and having me sign waivers the EMT people took me to a palm tree and laid my carcass down.  I had jokingly told Jen that since I had no family in Palm Springs that she was responsible for me.  I can only imagine what she thought when she got my text.


I laid under the tree for an hour or two.  Jen showed up and I called her Judy. Dave crossed the finish line and I called him Steve. I think I thought I was in Santa Monica for the Rose Bowl at one point.  Angela finished and did awesome. She got 1st in her division. Jen actually got 2nd in her division for the sprint the next day.  Dave set a PR for himself.  So team Abekat Anarchy did represent. 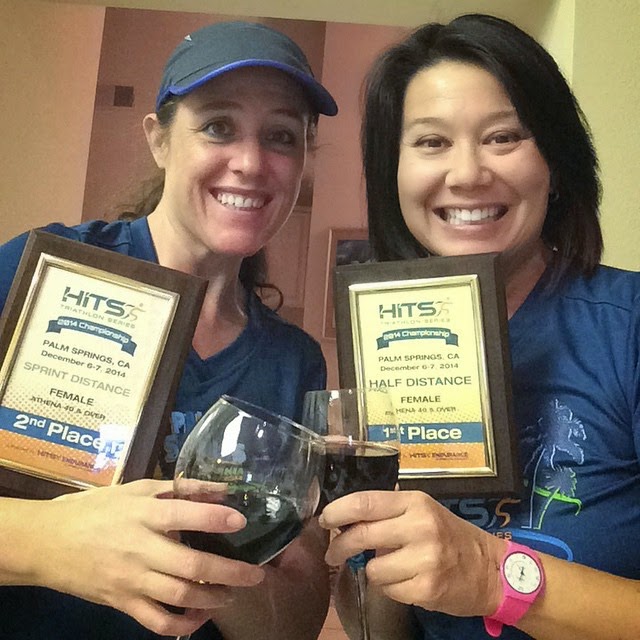 However, even without the swim mishap I don't know if I could have finished the run strong..or at all. I was completely feeling dehydrated by the end of the day.

So I am taking my wise sage's advice to "get my head out of my ass" and give up triathlons. At least the long ones.  I am going to focus completely on diet and weight loss and doing sprints. Possibly some olympics.  Maybe someday I will revisit the long course but only if I have a new body.

I had a blast with two of my best but seldom seen friends. I also met a new friend in Dave. So it was a good trip...as much as I can remember anyway.