Finally a race report. But not for me.  My wife did the Steamboat Lake Sprint triathlon on Sunday and did a fantastic job. We showed up Sunday morning and were told we had to park on the road outside of the state park where the race was being held  Not a big issue except there were 350 other athletes who had to park along the same road..the walk to transition turned out to be about a mile including a nice trek up a dirt hill. Kristine counted this as her warm up.

We went to the transition area and Krisitne put her bike on the rack.  Of course a triathlon is not complete without a siting of one of the numerous douche baguses.  Fortunately we got to see one up close..right across from Krsitine. The DB basically was taking up three spaces..laying out his towel and gear to cover as much space as possible.  I moved Kristine's bike over and the back tire hovered over his gear...Are you going to leave the bike there the DB asked? Well good morning to you also..and yes..the bike will remain there since there are other people that need to get on this rack.  And I outweigh you by 100 pounds and will break you in two just for fun if you touch the bike (I thought and did not say). Luckily the rest of the rack mates were super cool and even gave us an underwear show.

Anyway Kristine set up her stuff and was excited to get started. (I had forgotten (on purpose) to show her the course profile with the hills on the bike course and the hills and single track on the run course..) 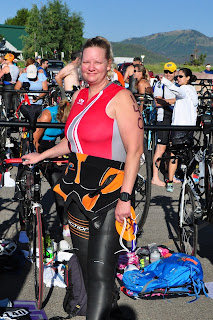 The swim was 800 meters and her first in the open water with a wetsuit.  Like most first time open water swimmers my wife was not looking forward to entering the water without the safety of the black lines painted on the pool bottom.  And of course the wetsuit added to the anxiety.  I wrote about her first effort in trying to get into a wetsuit. An effort that did not end well for her or for me.  Like most first timers she thought the wetsuit was super constricting especially on the arms..which adds to the anxiety.  She did a few swims at the gravel pond and Bear Creek and had similar issues with the arms and feeling constricted.  Thus we decided to order her a sleeveless wetsuit.  We of course went to Kompetitive Edge and ordered a Blue Seventy sleeveless.

A quick review on the Blue Seventy suits.  I love them.   My first wetsuit was an Xterra which was wonderful. It fit well..was long enough and seemed to be very flexible.  It was also very inexpensive. However, the Xterras rip..almost every time you put one on or take it off you put another hole in the suit.  I switched to a Tyr Hurricane 3 last year which got rave reviews.  I hated it.  It seemed to run small and it was definitely shorter.  Apparently the elite triathletes like the shorter suits..I did not.  The thing just did not fit..although you could tell it was built much better than the Xterra.  This year I bought a Blue-Seventy Reaction.  I love it. It is built extremely well and fit like my Xterra..pretty much the best of both worlds.

Kristine was in the last wave and was concerned that she was going to be the absolute last person out of the water.  The lake was gorgeous and calm. 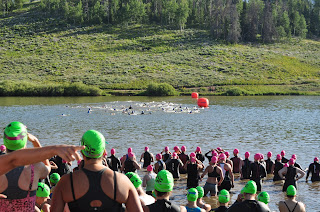 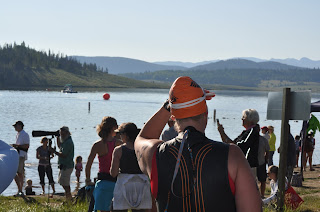 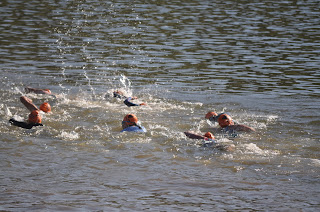 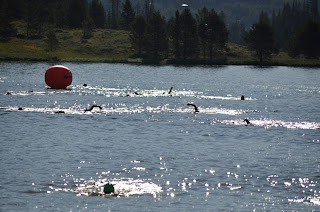 Much to K's surprise she was out of the water in 17:00 which was about 4 to 5 minutes faster than she thought. She was also not the last out of the water and passed a few people on the swim. She made a quick transition and was off on the bike. 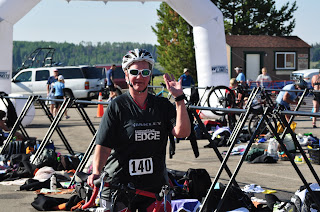 While she was gone on the bike I bothered the other spectators. I found one woman alone and found out that she was separated and thinking about divorce.  I then found out she lived about a mile from my office. Bingo..here is my card.  Unfortunately I got a little too much of her life story..like that she hadn't worked in 20 years and really didn't think she should have to..and that she had to down size from a Hummer... I told her that she seemed to be doing amazingly well for what she had been through and moved on.

While Kristine was out on the bike 5 time Ironman Champion Heather Gollnick came in to transition. I think this woman knows how to run. 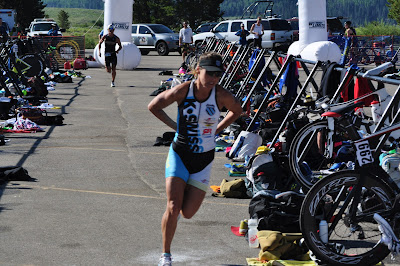 She ended up winning the women's overall.

Kristine came back from the bike and actually had a smile on her face. Considering the fact that the course was very hilly and that the run had to go up the same hill she had just come down I was relieved she wasn't screaming obscenities at me. 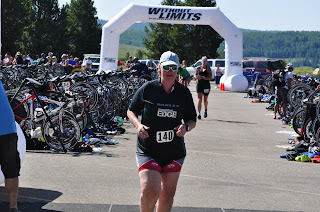 After she left I perched on the shore and looked across the lake at the trail that the runners had to return on.


Kristine crossed the finish line and ended up taking second place in the Athena Divsion!!  Athena is greek for "Woman with boobs and hips". 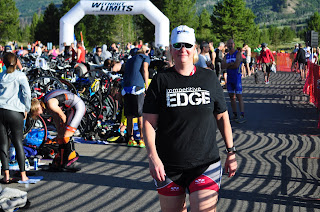 Overall the race was great. However there was room for improvement.  First of all I forgot my hat so my head was completely sunburned.  Second I did not hydrate nearly enough while spectating.  Also my race day nutrition was sorely lacking in protein. I relied almost exclusively on this 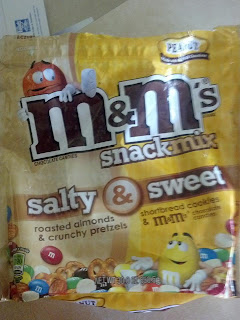 Luckily I did buy the family size bag so had enough for the whole race.  I should have taken all of the pretzels out and replaced with beef jerky..but overall the m&ms were pretty good..especially the shortbread cookies.

Monday I actually exercised myself..doing a little mountain biking in Steamboat.  If you get the chance you have to mountain bike..there are tons of trails for all levels of difficulty.  Here is a link to some of the trails...Steamboat Bike trails.  And here is a link to the Bike Guide which contains descriptions and maps of the numerous trail systems.  I decided to do the Emerald Mountain Trail System. It was fantastic..even for a fat ass like me.  I am definitely planning on doing an entire day of riding up there at some point..maybe a weekend.

I know everyone is asking..did you get hurt.  Honestly..I thought I separated my other shoulder.. I was coming down a very steep incline getting a lot of speed when the trail went from double track to single. I was flying and at the last moment I thought..hell I better walk this.  So I stopped my bike and I tried to get my leg over the seat. Unfortunately I have the flexibility of a mighty oak . I started to feel my groin start to stretch in places where it shouldn't and somehow while I was doing this I got an excruciating pain in my shoulder..so much so I actually fell to the ground.  As I was laying there holding my shoulder I tried to come up with a story to tell everyone..unfortunately the pain was so bad I couldn't think straight..and when I saw my wife I told her the truth.  She has taken my mountain bike away from me.

We spent the rest of the day tubing.  I actually got some good "before" pictures of me..you know..Wow..you were really fat..before you got really really fat!  I was also supposed to destroy the below video.


Don't worry ..we found her about 1/2 mile downstream and she was just fine. 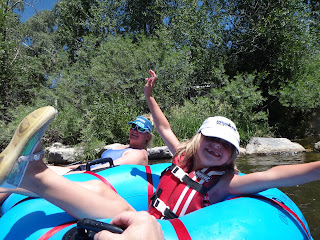 Lastly I want to give a big shout out to my friends Doug and Greg who did Ironman Racine 70.3 on Sunday.  Apparently the swim in Lake Michigan was more than a challenge..but both of the guys Pr'd the course and both going under 6 hours.  And anyone in southeastern Wisconsin looking for a Triathlon Club check out Strive in Racine.

OH..and one last shout out to Jen of From fat to finish line who did her first triathlon.  Way to go!

Happy Trails everyone.
Posted by Scott at 9:35 PM