My Dad found his way out to Colorado the last week of July. This was actually very exciting since he had not been out to our house for a number of years. What was even more exciting was that he planned on remodeling our bedroom bathroom.

My Dad got into town bringing his truck full of tools.  The first thing he did was replace our hot water heater which had gone out a week previoulsy. (Luckily it went out on a Thursday morning and we were out of town Friday through Monday..so my wife and I did not put up with too much of a stench from each other)

While installing the hot water heater we came across an awesome new product..plumbing fittings called the Shark Bite.  Wow..are these things cool..and expensive.  The fittings do not need to be soldered together..just push the pipe in and when you hear a click it is done.  Works with copper, PVC or PEX.  For anyone like me that hates plumbing these fittings make everything very easy.  Of course my Dad had to show off his skills and still solder most of the fittings together..but at least I got to use the shark bite fittings on one connection.

The next day our bathroom was already being demolished.  Interestingly enough..we found that we had a window in our bathroom.  Yep..the previous owners had not only walled off the window from the inside..but had buried the window about two feet below grade on the outside.  I'm thinking that this might be where my basement water issue may be emanating from.


Well the easy solution was of course to go buy a glass block window and install it.  Except for the fact that you can't buy a glass block window in Colorado..Yep..you can buy glass block..but no one had a clue as to where to get a glass block window. (or cheese curds..or a decent fish fry..or decent baked goods..or "red" chili..but I digress)  In Wisconsin you would walk into Menards and grab one off the shelf..of course there are no Menards in Colorado either.  So we decided to try and make the window ourselves.  Much to our surprise building the window was a piece of cake. Instead of having to use mortar between the glassblocks there are now just small plastic spacers that you silicone into place and boom..its done.

So for the last two weeks my Dad has been working on the bathroom and I have been bringing him lunch and helping out when I can.  By helping I mean holding the tools while he works.  The same thing I have been doing for 40 years.  The only difference is that he doesn't yell at me when I bring the wrong tool..I think he has figured that after 40 years I am a lost cause.


Dad had to leave yesterday morning and the bathroom is not quite finished..but what is done looks great. He promised to be back in a month and we will hold him to that. Below are the before and after pictures. 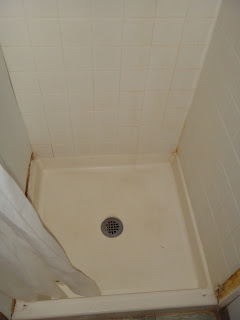 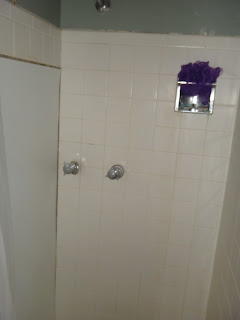 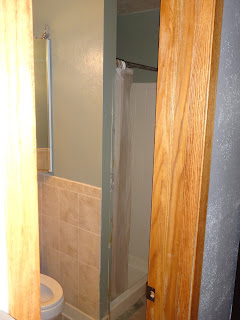 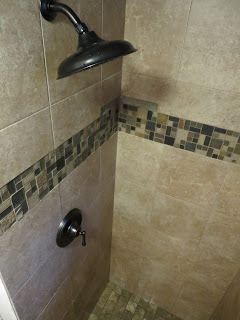 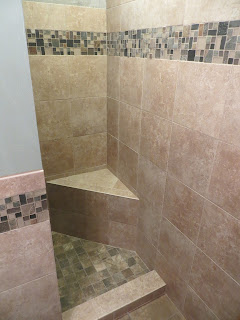 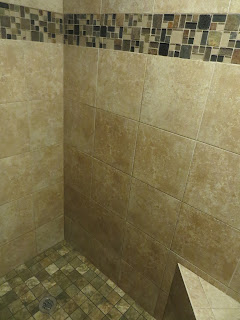 Although my dad worked most of the time while he was here we did visit my Uncle and Aunt in Grand Lake. While there they showed us around town and around the lake. I forgot how gorgeous Grand Lake was..and we even saw a couple of moose.  We also found a bar run by a guy who was born in Wisconsin that had fish for us on Friday.  Interesting fact about my Dad..He will not eat meat on Fridays..ever.  And he is not Catholic..thus every Friday we had to try and find a fish fry of some sort.  Last Friday I was going to give up when my Dad saw a Mexican restaurant in Golden that said best seafood in town.  I tried to warn him that it was a Mexican restaurant and "Best Seafood" in Golden was a very low standard.  Let's just say he will be glad to be back in Wisconsin next Friday.

The visit to Grand Lake included a ride in the amphicar..which to say the least was very cool..right from the pavement and into the water. 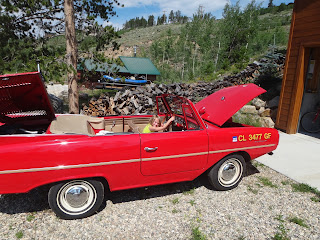 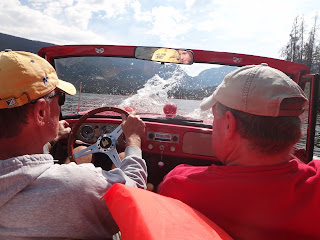 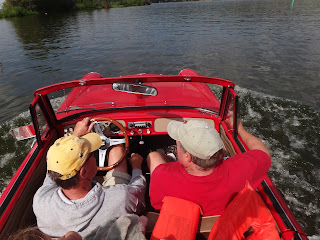 As my uncle said..this is not a car for introverts. People were running to the docks to take pictures.


So..no triathlon updates. Although I must say that it has been a very enjoyable last couple of weeks getting to hang out with my dad and work on a project..just like when I was growing up working at the family business.  I have always marveled at my father's abilities and workmanship. Honestly, the sense of accomplishment and being able to see a transformation take place and that you are adding value to something are feelings that I just do not get with my profession.  My dad told me that he loved what he did and never regretted getting up and going to work.  I wish I could say the same..I guess a lot of us wish we could say the same.

Since this is the DIY blog post I would be remiss if I didn't mention the debut of Angela and Jen's new show on the DIY network..Logheads. It debuts Thursday August 22 at 10 p.m. on the DIY network.  Angela and Jen have spent months filming the show and getting it ready for production..the least you can do is spend an hour watching it..lol. (They had to travel to Kentucky to film the show..just sayin..)

I do have one big announcement..I am getting rid of Directv and going to an antenna and netflix. (Of course I am waiting until after August 22 to do this) The only thing I dread is that football season is coming up which means I will need to go to sports bars to watch the Packers and the Badgers. (Which means any money I am saving by not having Directv will be spent on nachos and drinks)  I was debating about whether to cut the t.v. or not..when my dad turned me on to this show he now watches called Baggage hosted by Jerry Springer.  After watching four or five nights of this I realized that civilization is crumbling..but I really do not need to watch it happen on T.V.  lol.

Happy Trails everyone!
Posted by Scott at 11:58 PM