woo hoo! no injuries this week.


Warning..this post contains pictures which may be problematic to those with weak intestinal fortitude.  Just sayin.

The separated shoulder did not turn out to be that big of a deal. It did hurt a bit and it has kept me from swimming but I was able to get some biking in. I also started running again on July 4. In fact the whole family went for a hike/run up South Table Mountain by my house.  South Table is actually a mesa..thus it has a flat "Table Top". The hike up the Lubahn trail is pretty quick and fairly easy.  It is not conducive to mountain biking but there are other trail heads which are.  The entire hike up to the top of "Castle Rock', the prominent out cropping where a dance club was in the 1920's is about a mile in length and about 30 minutes taking it slow. Interestingly enough Castle Rock was also used by the KKK in the 1920's for cross burnings and meetings..they weren't too keen on my Irish Catholic brethren coming to Golden.

Once on top there are numerous unofficial trails to hike or run along the flat top.  Although this sign says you should not run or jog in the area. lol. (I have yet to see a mountain lion on South Table..although I have seen numerous rattle snakes and coyotes) 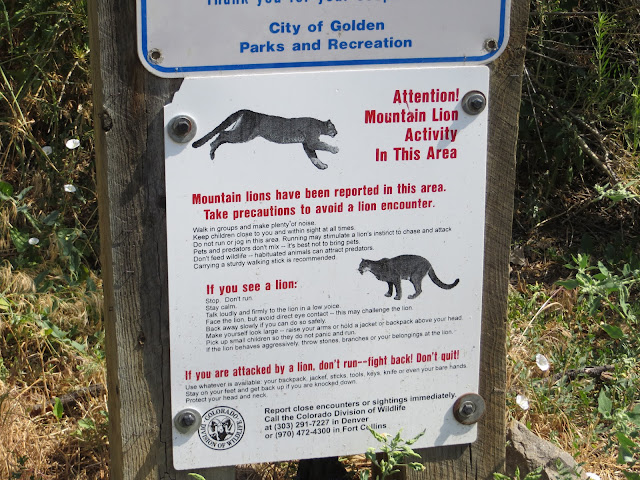 I should use South Table for training a bit more. It is near the house and the hike up is a good warmup for running on the trails on the top.  However, I am concerned I would not be able to out run any of the wildlife  up top..although..again..the motivation to run from a pack of coyotes or a mountain lion might be beneficial to me.

I may be changing the title of this blog to Train Old Guy Train!  Age is catching up with me. It is now taking me longer to shave my ears and eyebrows then it does my head.  I also went out last night for the first time in  a long time.  Ended up getting home at 11:00 and spending the next hour and a half on the bathroom floor barely able to move and  wondering if I was going to die. It was one of those toilet and garbage can situations.  I wish I could tell you I was out drinking but unfortunately all I had was a strawberry shake and movie popcorn.  Apparently God is playing the cruelest joke of all on a Wisconsin boy by slowly making me lactose intolerant with age.  What the heck!! I was originally booted out of Wisconsin for not liking beer..now if I can't eat dairy they aren't even going to let me back to visit.

My daughter will be looking for a new home soon.  She has started to taunt me.  We did a family track night this evening which was fun...for a while.  First she rode her bike around the track while I ran and she informed me of her speed and prowess on the bike every time she passed.  Then when she was done riding she ran with me and informed me that she was pretty quick and I was not.  She then did a Usain Bolt pose. (The night before we watched a documentary on Bolt so she got the pose down pretty good).

Yes..she is getting a little smug.  The other day she was cleaning her room and I was bothering her..she told me to stop because she had to focus.  I asked her if Daddy was focused and she said...not when you ride your bike since you always crash.  I hope she enjoys community college.

My wife joined in the taunting so I decided to punish them in the the worst way possible. I completed my track workout shirtless.  Yes..evil..but they deserved it.  I'm actually surprised the camera was able to focus with the shine coming off the pale white. 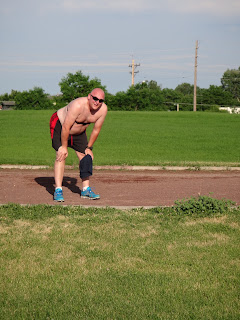 I actually did not have my heart rate monitor with me.. I was just using the strap to keep everything from bouncing.  Amazingly enough..with how bad the pictures are the first thing I said to myself was..damn..that left quad is looking awesome.  I am so glad I am a guy and can focus on the one positive.

This week the training will be running and more running..biking and nutrition.  I am meeting with Dina from Fuel4mance to see if she can tweak my eating a bit.  I'll let everyone know how that goes.  I am down 2 lbs from last week to 236..which is a positive. But I actually took body measurements.  Let's just say baby got back.

Oh..I also subscribed to Netflix and the first english program I watched (After watching the Korean series Killer Girl K and the Japanese movie Battle Royale..awesome..makes hunger games look like a school picnic) was the documentary Fat Sick and Nearly Dead  (There is actually a link on the page to hulu where you can watch the movie for free) Anyway..it is about a guy who basically goes on a juicing "fast" and loses a ton of weight and feels just fine and dandy. (The guy is also a millionaire who lives in Australia and is single..which may help his happiness a bit). But there is also a truck driver from Iowa that he meets and the second half of the movie follow his story using juicing. (A much more sympathetic fellow). After watching the movie I thought about doing the juicing fast myself.  I contacted my friends Angela and Jen about it..since they make documentaries..and as such would be experts on anything that was in a documentary.  I was informed that the juicing route would not work for me since Sunny D would not qualify as a vegetable juice.  (we'll see what Dina has to say about that)

Hope everyone had a wonderful Fourth of July . Happy Trails and enjoy the summer.