This week there were a lot of positives.  We will gloss over Monday since it was crap.

Tuesday turned out pretty good. My wife and I met with Dina from  Fuel4mance to discuss nutrition. I like Dina..but I don't think she quite understands me yet..she has a hard time deciphering whether I am being serious or not. I wanted to tell her to meet at McDonald's but didn't want to scare her away..so Tokyo Joes was the place.  The meeting was very productive and also served as marital therapy.  My wife and I  discussed each of our hurdles in the nutrition battle and apparently the biggest hurdle for each of us..is each other.  Part of the problem is that we do not like any of the same things.  For example..vegetables. I do not care for them but my wife loves them. Even the ones we do agree on..we really don't.  I love me some canned green beans sitting in that salt juice..water..whatever it is.  My wife actually likes fresh green beans.  I could eat the same thing over and over everyday..while my wife wants variety.  Unfortunately the stuff we do agree on is the crap food.  Pizza..mashed potatoes..etc.  We don't even like our food prepared the same.  I think luke warm is plenty hot for any food while my wife somehow enjoys food that will sear the inside of your mouth.  Mini raviolis are perfectly acceptable out of the can at room temperature and spam is fine just slicing it up and wiping the gel off....just sayin.  Also, if one of us was feeling like crap food we would tend to convince the other to eat it as opposed to fighting about it.

I think Dina was having a problem just trying to find foods that were healthy and we both agreed on.  Dina put together a calorie target for us along with targets for the macronutrients (protein, fat and carbs).  The Dina plan plays down carbs quite a bit allowing for larger percentages of protein and fats.  I got my calorie limit and thought it was per meal..not the day.  We are also going to track our calories online.  I requested that we do this just to understand our calorie intakes.  So far all we have been doing is tracking and trying to stay in line with the calorie guidelines.and it seems to be working. This week I am down from 238 to 231.  I think the sheer embarrassment of actually having to log.."snack..large slush, two corn dogs and large tater tots"...has made me much more cognizant of what I am eating. I know that I also eat out of stress..I frequently go out to lunch on work days just to keep from strangling the staff.  After speaking with Dina I now understand that strangling the staff would not only provide me with exercise but would keep me from eating unneeded calories. (Dina actually suggested lunch time workouts).

Saturday I worked the Kompetiive Edge tent at the Boulder Peak Triathlon.  Despite the heat it was actually a good time. I met some new people..other athletes and some of the reps.  And of course I met two guys wearing Bucky Badger shirts as well as another woman who swam at Wisconsin on scholarship.  Go Bucky!  Yes..we are everywhere.

The Newton rep I met tried to convince me to come back to their shoes after my one year hiatus.


I promised I would try the new line..which it just happens is being rolled out at Kompetitive Edge on Thursday evening. 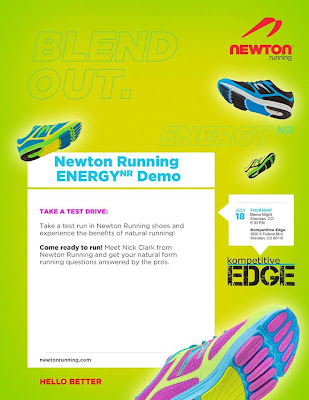 If you are interested in Newtons, KE on Thursday will be the place to demo a pair and have your questions answered by the professionals.

Today was also quite fun and productive. My daughter and I started the day with swimming. We showed up at the rec center and the lady behind the desk told us that there was no swimming until noon.  I asked if the schedule was wrong since I had checked it online and it said that lap swimming was from 10 to 12.  She looked at me incredulously and said lap swimming was open and then looked at my 5 year old and said..is she lap swimming?  My daughter without skipping a beat said..I have a triathlon to train for.  It's my third race and second triathlon.  I just looked at the woman and with all seriousness I said. She's 5 years old..of course she swims laps! Do you think she goes to the pool to play? ..she has to get better to get that scholarship to Wisconsin. The lady just rolled her eyes and let us in to swim.  My daughter picked up her abekat anarchy back pack..put it on, put her blue seventy goggles on her head and followed me to the pool.  I had to do everything to keep from laughing.

My daughter has been taking lessons from a friend of ours and I was amazed at the improvement in her freestyle.  I asked her to swim 25 yards for me and she asked if I wanted her to breathe every four strokes or every three. (I breathe every two).  She then swam the 25 yards and then another 75 yards of back stroke.  (LOL..Is my daughter going to swim laps?)  We need to work on her endurance since after the first 25 yards of freestyle she is a little out of breath and form on the return 25.  She then told me she needed to get a kick board to practice kicking. jumped out of the pool and returned with a board for me and her.  I usually don't do kicking drills since I don't use my legs. I am not flexible..I kick from my knees and not my hips and I actually will go backwards using a kick board. However, to make my daughter happy I kicked 25 yards with her.  At the end of the length she looks at me and says..You are kicking wrong. You need to do it with straight legs. You are kicking from your knees.  Really? Thanks...lol.  We then did a few more lengths and she says... Ok. I need to use fins..jumps out of the pool and gets her fins to use.  She then proceeds to swim freestyle to the end of the pool and back faster than I did when I started swimming two years ago.  wth?  And I never use training gear n the pool...for two reasons..my first coach Suzanne Atkinson from Steel City Endurance convinced me to swim train using the Total Immersion method..which doesn't use a lot of swim tools. (And by the way..TI worked awesome for me)  and two..I look like a total idiot using the gear.  However, my daughter looked like a pro.

Much to my wife's chagrin I decided to go mountain biking this afternoon. I made sure my phone was fully charged so when I crashed I would be able to watch a couple of episodes of Archer on my new Netflix account while I waited for help to arrive.  I went up South Table mountain..but by a different route then when we hiked it last week.  It was a little bit of a climb to the top but nothing bad.  Once on top there are actually some nice wide paths that are fairly flat. The trails would be great for beginners or old men like me.  They would also be nice for running.  Miraculously I didn't crash the bike once.

Once I was done with the ride I took my daughter to the park to play where we witnessed humanity at its finest. First, we saw a pizza delivery guy pull into the parking lot and walk up hill to this family which was seated at a picnic table about 300 yards from where the guy had to park.  The pizza guy delivered the pizza and as he passed us he told us that the family had given him a $1 tip.  LOL.  It was incredible to me that someone did not go down to the parking lot to meet the pizza guy and then gave him $1.00 for his efforts. Wth?

Then, as I was watching my daughter play I struck up a conversation with two parents (I am using this term loosely)  Cletus and Bobbie Sue were scratching themselves (Seriously) and trying to find a lighter for their smokes. I asked them what grade their kids were in.  They said the one my daughter was playing with was in second grade. I told them my daughter was starting kindergarten (Yes I did this with pride since my daughter was two inches taller) They said..wow..she is tall..Is her father tall?  WTF!! Really dude? I informed him that I was the father and even though I am obviously of advanced age I was able to properly raise my daughter.  They then changed the subject and started telling me how wonderful Waldo books are since they could give them to their kids and they could leave them alone for hours.  My guess is that I could give the Waldo books to these two parents and leave them alone for hours.

I decided it was best to leave the park and we went to Papa Murphys to pick up a Chicken Delite pizza.  Wow..I thought it was wrong ordering it ..but in print it even looks worse.  Much to my chagrin the pizza with the sun dried tomatoes, veggies and chicken with garlic sauce was actually very tasty.  But I digress.  I park the car and am letting my daughter out of the passenger side when another care parks right next to us.  I hear the daughter saying to the mother. I can't go in,,I'm not wearing pants.  The mother says..your shirt is long enough..just don't bend over.  Really?  Of course the two of them are going in to Papa Murphys.  And the daughter is probably 16 or 17 wearing a long shirt that goes down to mid thigh.  How are you not wearing pants?!?!  And how did you drive someplace with your mother without pants??? And how did your mother just act like this was an everyday occurrence?  Obviously she was within the guidelines of  "No shirt, No Shoes, No Service"  But aren't pants a given?

Needless to say I was glad to get home and enjoy some pizza with my wife and daughter.  I was even more overjoyed to hear my daughter yell to me while I was downstairs...Hurry up Dad..Bob Roll is on!  It's nice to have normal.