Back in the saddle again..literally.

So..my doctor, psychologist, yogi, physical therapist, coach, nutritionist, wife, brother, personal surgeon and homeless guy on the corner of  Speer and Broadway have all ok'd me to start training and racing again. OK..they have not ok'd me .. they have ordered me to.  So really the first thing now is to assess the damage that a two month layoff, total physical, mental and emotional breakdown and fast food eating binge can have on my already less than fit body. (Turns out it was surprisingly similar to spending a week with the inlaws)

The first assessment was easy..the scale.  235.  Hmm.only about 25 lbs heavier than I want to be right now. Also did a blood test.. Apparently i have eaten a little too much grease since the results came back as "flammable".

So this first week Coach wants to make sure I can still walk fast and remember how to ride a bike and swim.   She also wanted to kick me in the butt about my diet...no more fast food or comfort food.  (And Mcdonald's is running their buy one get one free quarter pounder sale!!)

I have also revamped my race schedule to shorter distances.  One of the pros of this is I get to do more training workouts with my wife and daughter.  We had family track night on Monday.  My daughter actually taunted me as she ran around the track at a much quicker pace than her father.

So..back in the saddle and I have already learned three important lessons.

Number one.  When your wife is trying on a wetsuit for the first time it is not a smart idea to  be within ten feet of her and give advice on how to put it on.  As anyone who has worn a wetsuit knows the first time you put one on it takes about 15 or 20 minutes and you feel like you are trying to put 10 pounds of crap in a 5 pound bag.  Further, you begin to feel and look like the Stay puff marshmallow man.  And even though my advice was extremely well intentioned and helpful.. it was apparently taken the wrong way..especially when I told her we needed to grease her up to fit her in.  (In my defense that is what all of us triathletes do!!. Use Pam or body glide or Slik to grease up a bit...)  Needless to say..lesson learned.  Also, taking pictures and laughing was not a good idea either. (my camera is now broke)  The only good thing is that once the suit was on she could neither chase me around the house or throw a good punch.

Number two.  Biking gloves need to be washed.  I found this out last night. First time I have been on my road bike in two months.  I have a container in the back of my truck that I keep clothes, tools, tires and nutrition in.  A container I haven't even looked at in those last two months.  My biking gloves..which I don't think I have ever washed..have been sitting in the back of my truck roasting in the heat along with a number of my other clothing items. (i.e. socks, shorts, wet towels..or possibly moldy at this point and underwear..again possibly moldy at this point) I also found two curdled boxes of chocolate milk..and what I think was a PBJ sandwich.  I put the gloves on yesterday and started my bike ride. About 30 minutes into the ride I went to wipe the sweat off of my forehead and face.  I almost crashed my bike the stench from the gloves was so horrific. What made it worse was I couldn't believe how bad the stench was so I had to smell the glove again..yep it was the glove.  I then of course had to see if the other glove stank that bad..which it did.  In hind sight I probably should not have had to test both gloves..or I should have stopped riding and taken them off.  However I finished my ride.. somehow surprised each and every time I went to wipe sweat away.  Now that I think about it..the gloves are in the back of the truck..probably should have brought them in last night.

Number three. White lycra is never a good idea..but especially on my enormous butt. As part of my ride on Tuesday night I decided to wear my brand spanking new UW Triathlon team bib shorts.  These bibs have a white and red panel..but somehow on me the white became opaque and the red a sickly pink.  I was hoping it was a defective pair..but when the bibs are off they actually return to white and red.  Luckily there were hardly any humans on the trail to witness this fashion faux pas. Worse yet I got grease on them.  A google search on white lycra and grease brought up a number of options..the most prevalent was Dawn Dish soap..which I will try this evening..but other more interesting ideas:

1. Goop or other similar grease cleaner
2. Simple Green (I have tried this and it did not work well)
3.WD-40 to loosen stain and then Dawn dish soap.
4. Brake parts cleaner. (As one person put.."this will amaze your friends and horrify your spouse".)

Supposedly these solutions work on chap stick also which somehow has ruined many of my dress shirts as well as my dri-fit shirts..which is amazing since I never wear chap stick yet it somehow gets into our wash.

And to show that the last eight weeks or so have not been a total loss I was able to rip out carpeting and lay new flooring in both the home office and our main bedroom..the laminate "wood" floor was actually pretty easy to install with the most aggravating part of the process being the tear out of the carpet and floor prep of taking out all of the carpet bars and staples...especially in the concrete floor downstairs.  It looks like I have at least 5% of my Dad's construction talent. 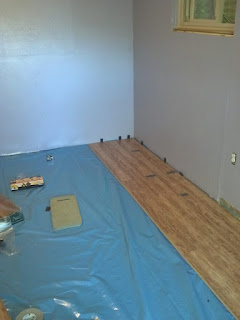 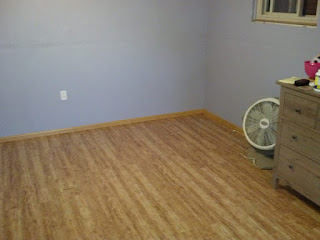 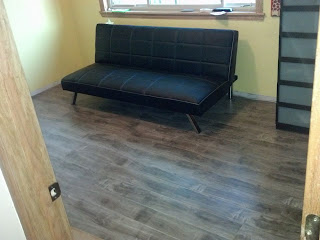 Lastly I was able to get out for a nice ride on my new Scott Scale 930.  I did not do any climbing but did do some cross country riding. I totally understand why people want a 29er..the bike went over everything flawlessly..the carbon frame ate up the bumps even though it is a hardtail and the 2 x10 sram shifting worked awesome.  I can't wait to take it back to Wisconsin and Minnesota and hit some of the woods.  I think it will be very at home there.  Thanks again to Ryan at Kompetitive Edge for hooking me up. I can't wait to race the bike in August at Xterra Lory. 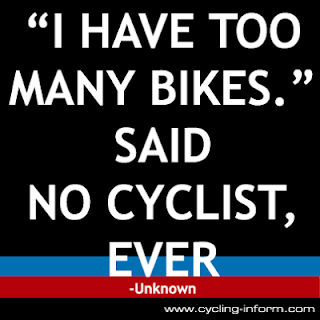 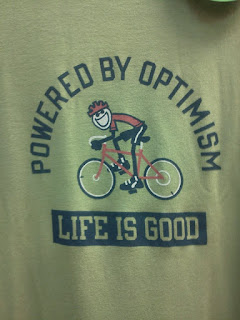