I'm ready to be done with the gym..

I can't wait for the weather to be warmer and the sun to be out longer.  These trips to the gym are becoming unbearable.  Friday night I had to do a run fitness test.  I ended up leaving work late and it was too dark to run outside. Also, because I dropped a colleague off I had to go to a different Ballys then i usually go to.  I figured Friday night would at least be slow..I was wrong..the place was packed.   I entered the front doors and had a decision to make..the stairs or the elevator to get to the second floor gym..yes of course I took the stairs.  But there was a group of four women who waited for the elevator..and I ended up seeing them later in the gym..on the stair climbers...WTH?

This new Ballys did provide me with cultural learning experiences.  Since I was the only one speaking English in the crowded locker room I was able to pick up some new phrases. Unfortunately I did not learn.."do not use the hand soap" which I could have used later on.  I also spoke to the nice gentleman next to me on the treadmill who I asked about his tattoos. Apparently he was an ex gang member and was able to school me on some of the abbreviations being used in the Denver area by the various gangs.  You never know when this knowledge will come in handy.  I used to be down with this knowledge in Racine and Milwaukee but of course there are different gangs out here.

So I did the fit test on the treadmill..my test was more of the unfit variety.  The idea is to run at my MAF (maximum aerobic fitness) heart rate for 3 miles and to record the time it takes to run each of those miles. My MAF is 135..thus the idea was to stay at that heart rate for the entire three miles.

How to calculate YOUR Maf heart-rate:
180 minus your age……..then: (fall into ONE category, only)
-subtract 10bpm if you’ve had a major illness in the past year
-subtract 5bpm id you’re inactive
-add 0 if exercise for up to a year w/ no illness
-add 5bpm for training for 1-3 years and making measured progress
-add 5 to 10bpm if you’ve been training and racing very competitively in your age-group.

I actually had to walk numerous times to get the heart rate down but I was able to keep the heart rate at an average of 136.  To say that I was disappointed with the test is an understatement.  Now I regularly run much faster (hey..everything is relative) than this..and I thought I had been doing the majority of my training in the 130 - 135 bpm range.  However I went back and checked my logs and I have recently been running in the 145 range which is a lot higher than last year.

The purpose of the fit test is to take it periodically and hopefully see improvement..and in my case huge improvement.  I think that this test was an abnormality so we will take one again sooner than later.  It was crazy hot and I had been feeling a little sick the couple of days before the test so I am hoping that had something to do with it.

I have used this fit test the last couple of years for both biking and running and find it incredibly useful as far as determining how fit I have become.  I would suggest that everyone do the test and follow up every 3 to 4 weeks.  My bike fit test is scheduled for this weekend.

Saturday I went to my usual Ballys and unfortunately everyone in the locker room was speaking English.  I had to listen to the two guys in their 50s talk about the van the one guy owned.  Now the guy who owned the van had a mustache and a mullet..so this was no surprise.  He was proud of the fact that all he ever owned was vans and that they all had beds in them...I'll save you the details but needless to say I tried to change as quickly as possible.  The creepiest thing about the whole conversation was the hero worship the other guy had for the van man. Well that and the advice he gave van man to take his vehicle to the car wash to pick up the women...I don't even want to know..


As I hurried out of the locker room to wait for my daughter and wife I slipped on the floor and fell right on my rear.  Now I was wearing gym shoes (aka running shoes) so I thought this was strange to slip but blamed it on my natural lack of balance.  As I waited, I saw one of the managers also slip on the floor..although he did catch himself before hitting the ground.  So I had to ask.  What is the deal with your floors?  He told me.."well we decided to go in house with our cleaning..and the guy we hired doesn't speak English..so we think he is using the hand soap to wash the floors with."  Umm..so how long has this been going on? "well about two months..we did put mats down though"  Did you know you have Spanish speaking employees at your other Ballys location that may be able to talk to the guy?  "Yeah..but I think the mats will do the trick"  I had no idea what to say after that..and then I see the cleaning guy with his mop and bucket..during the Saturday rush..starting on the floors.  I'm no attorney..well maybe I am..but I think there may be a lawsuit in the near future.  Oh..and this is interesting .. as we left the facility I saw someone's shorts and bra laying outside the entrance..HA! I am not the only one!


Sunday I got to spend time riding with my favorite training partner..my daughter.  She just got a new "used" bike and was learning to use the brakes and gearing. 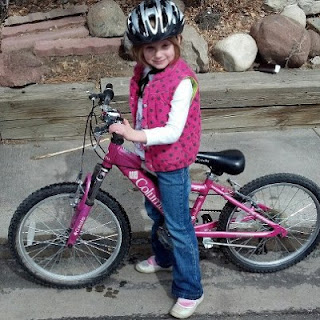 And the family has decided to do a race together. The Maple Grove Half Marathon.  Place your bets now on who is going to finish with a faster time..me or the wife..We have about 9 weeks to train and it should be a blast. My brother's new coffee shop will be one of the main sponsors...so if you are ever in Maple Grove, MN be sure to stop by the Daily Dose Cafe.  They have great coffee and drinks as well as sandwiches, salads and baked goods.

Take care and have a great week.