3 things that have me shaking my head

Three things this week that had me shaking my head.

So I got done doing volunteer legal aid work today in a somewhat sketchy part of Denver and decided to take the two new interns to lunch.  And yes..I do pro bono work for the poor and down trodden..although I tend to have to bite my tongue..and sometimes I don't.  Like the time a guy came in and started complaining about the system and how unfair it was and how was he supposed to get a job when the courts wouldn't seal his arrest record... I had to remind him.."You killed somebody with a machete!!  You are damn lucky to be walking the streets!  Yes..sometimes the volunteer work also helps me test my patience.   Anyway, both of the interns are second year law students at D.U... you know the University of Denver. (Don't ask..apparently here in the west they aren't bright enough to figure out University of Denver is U.D. or University of Colorado is U.C. not C.U..but I digress).  So, we walk to the Taco Bell next door. One of the interns says..I haven't been to a Taco Bell in years and the other says."I've never been to Taco Bell"  How is this even possible?  These are law school students..who obviously went to college..Hell Taco Bell was mandatory for me through college and law school since I couldn't afford anything else.  Anyway..the Taco Bell we went to was particularly awesome...the manager had to buzz you in to use the bathrooms and at 2:30 in the afternoon there were already two drunks passed out on tables and you had to give wide berth to every one who walked in due to the pungent fragrances they were exuding,  The girls actually studied the menu and I had to tell the woman operating the register to wait for their order...at least I think it was a woman operating the register..she had on a stocking cap, scarf over her face and gloves..I kid you not.  They then asked..is the cheesy potato burrito good?  The person behind the register says.."No..but a lot of people order it"  I started laughing and ordered the burritos for both of them.  The girls and I ate our lunches and talked and in the end they both agreed that Taco Bell was good food and a great value...

2. What were they thinking

So I am looking at possible races to do and the Slacker Half Marathon is recommended. I check out the website..The race starts in Loveland at over 10,000 feet and goes down to about 8400 feet in Georgetown. (I can feel my knees hurting already)  I almost fell out of my chair when I saw the next paragraph on the webpage trying to persuade people to do the race:

"The half marathon begins at Loveland Ski Area and travels the first five miles through a Forest Service area of wetlands and natural waterfalls on a non-motorized paved bike path built to sustain the weight of an ambulance!"

Why are the race directors so excited about the fact that the trail will support the weight of an ambulance that they have to use an exclamation point?  Needless to say this race was crossed off my possible list.

3. Harlem Shake.  Is it worth prison time, your job or your hockey career? (or your dignity)

OK..what is with this Harlem Shake craze..If you don't know what I am talking about you can watch this compilation video..Harlem Shake It has gotten out of hand..an Israeli military commander was stripped of his command and is spending 21 days in prison because of  it Israeli Harlem Shake and in Minnesota 6 members of a varsity hockey team were suspended and missed a playoff game because of it. Minnesota suspensions  What is this world coming to? 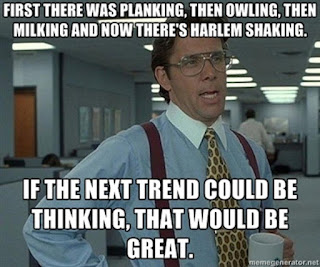 OK..done with my rants.  On to triathlon.

First..I am not losing weight..I am eating better..I gave up going out to eat for lent and as such I thought I would be down 20 lbs..instead. I am down nothing...zippo. Although I am feeling much better during the day and my workouts.. I guess I just need to start counting the calories again.

Second, my wife has decided to do some races this year.  She is even training with me..which I thought would be great but is turning out to be a bit humbling since she is apparently a better runner than me.  My new training partner has caused some changes around the house..including the way we watch movies.. 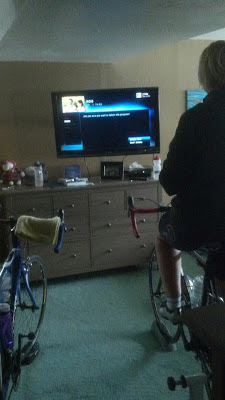 Third..I went to see Joy, my favorite Physical Therapist at University of Colorado Sports Medicine and she checked out my right leg.  Like I suspected I have lost a ton of strength. In addition I have pretty much zero flexibility in my hips..which explains why I can't kick at all during the swim..I have neither the strength nor range of movement to actually propel my carcass.  Never fear though..Joy gave me a ton of exercises and stretches to get some drastic improvements in the next four weeks.

Lastly, it looks like I will be doing the Maple Grove half marathon in May.  My brother's coffee shop may be one of the main sponsors so I think I need to be there. It sounds like a blast. I'll update this information as it becomes confirmed.  I am also trying to convince some of team Abekat Anarchy to join me in the race. 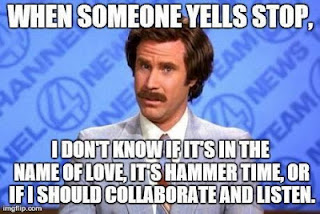