Well Spring is almost here..and Daylight Savings Time (hereinafter referred to as "DST")  has started.  I think DST may have saved my training.  I have found it very hard to fit training in this year.  I am in charge of getting my daughter off to school and thus any morning training is nonexistent.  The chances of me getting out of bed to train in the mornings is zero with or without kid duty..but at least I have an excuse. I get off work somewhere between 5 and 6 and when I get home it's family time and dinner.  My wife and daughter are in bed early..like 8 o'clockish since my wife works extremely early in the mornings.  Thus getting on  the trainer or treadmill at 8:00 at night really isn't an option.  There is a rec center near me but it closes at 9 and the closest Ballys is 25 minutes away..therefore even if I left at 8:00 I probably would not be coming home until 10 or later.

DST has helped with all of these issues. Since it is lighter later the whole family has had time to go out after work and get some runs or bikes in.  My daughter is keeping pace with us on her bike when we run or hike.  Even if the family can't work out I have found it much easier to get out for a later run or bike ride.

Needless to say my training is getting more consistent and I am getting more fit. I can tell because I am sore.  When I am training like I should I am always sore..not injury hurting..but that soreness you feel when you have worked hard.

My wife also continues to work out and has made the Rev 3 Maine half her goal for the season. She has only completed a sprint before and is coming off of knee surgery but she is already much more consistent in her training and is easily out running me.  I am very excited that she has taken to the sport. Unfortunately she does not enjoy the shopping for tri and bike gear or even checking out the new training articles or books..to me that is 75% of the fun.  I am trying to get her to train with a heart rate monitor but she refuses to listen to me..hopefully someone else can convince her of the benefits.  We went running on Saturday and she did great leaving me in the dust.


Another positive indicator in my training is that I got out for a ride today with my buddies Doreen and Angela. We did a 1.5 hour ride on a fairly flat course, keeping the heart rates low. The group training is always beneficial for me..it was about 45 degrees and windy but by the end of the ride I was ready to take my jacket off I was sweating so much. The girls disagreed with me still trying to tell me it was cold.


So it has been a good weekend and good week in training and I am looking forward to stringing even more weeks together.

I did try two new products this week. The first were my new running shoes. The Scott MK4s. 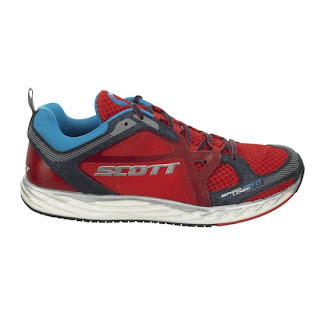 Obviously the shoes are cool because they have my name on them as well as the fact that they are Badger red.  They actually feel and run great also.  The fit is good and they seemed to be made for a midfoot striker. No matter how hard I try I will never be a forefoot striker and thus the shoes are made for me.  I have only had them out for two short runs but so far so good.  The only negative I can see are the shoe laces..much like the laces on the Scott trail shoes I have, they keep coming untied.  Even though Scott's promotion of the shoes states the laces are made specially to keep from untying...a swing and a miss.  So I just double knot them and I am on my way.  If you are interested in the Scott shoes you can pick them up at Kompetitive Edge either at the store or online.

The other product I tried on my bike ride was the OSMO active hydration.  I tried the black raspberry which is one of their new flavors.  I cannot really tell you how well it worked at hydrating since my ride was only an hour and a half..but the taste is very weak.  It is barely there, much like the Skratch products.  To me this is a good thing. It tastes like I am drinking a lightly flavored water instead of a heavily sugared drink like gatorade or power bar endurance.  I used Skratch last year and it worked well..the OSMO is getting even better reviews so I'll try it the next few weeks and see if it helps with the hydration issues I have. 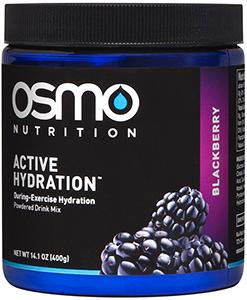 I also have to give a shout out to my friend Casey.  I met Casey last year at Rev 3 Maine. Casey was not a triathlete or runner but was married to one and waiting for her to finish. We discussed a lot of things at the race including our mutual hatred for triathletes who can only discuss things related to triathlon and who were socially inept.   We also discussed the lycra that I was wearing since I had just got done racing and I explained to him it was a necessary evil to wear during races but I tried not to strut around in tights. I believe his answer to me was something that amounted to ..there is no f'in way I'd wear them.

Below is a picture of Casey from today and 50 lbs lighter then he was in August. 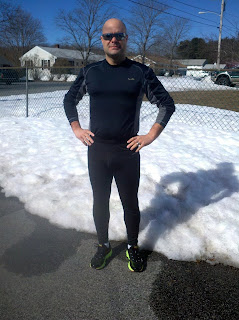 Really dude??  I mean I understand that us bald guys are sexy and all but this is how he was dressed to go to church.  Also..according to his wife he spends more time in front of the mirror than she does..which if you knew his wife this would be an impossibility.   Ok..maybe he was not going to church in the picture but a 5k which he PR'd.  Congrats!!  Keep up the good work.  And I feel sorry for Jen Small since she has two bald guys with incredible egos that she has to deal with.  At least she can just ignore my emails and texts...she has to live with this guy. lol