OK..So I won't do the Rev 3 adventure race in Wyoming.  I would have to make it my "A" race and also try to get another 24 hour race in before July.  However it is obviously something that I need to put on my bucket list and I have no excuses for not training for it.  Being in Golden I have places to rock climb, mountain bike, and paddle within 30 minutes of the house,

So I am still trying to figure out what to do as far as races.  There are a number of variables I am still waiting on to determine what I am going to do.  Depending on those variables I may target St. George Utah 70.3 in early May 2013 or Rev 3 Knoxville at the same time as my big early season race.  Both would be destination races but something that could be done in a long weekend.  The nice thing about the Rev 3 race is that I would have a choice between the Olympic and Half distances depending on training.

Speaking of training, I jacked up my foot again about a week ago.  Same tendon issues I had when I started weight training about a month ago.  Thus I have not been running but lifting instead.  I am actually liking the lifting and am hoping to see some strength gains soon. I know.. I will probably be burned at the stake for heresy...but I think my Newtons may be part of the issue.  Going to run in something other than the Newtons and see how that works out.

My diet has been "OK". Lots of room for improvement..but better than it used to be. The goal for this week is very simple.  Clean breakfast..either eggs with veggies or a smoothie with spinach and protein.  Clean lunch..sandwich with veggies or salad with protein.  Simple.  Let's see if I can do it for five days.  (OH Crap..I forgot abut Halloween..)

Speaking of training, my wife has been doing awesome.  I don't think she has missed a day of scheduled training in 5 weeks.  Saturday she got up early and braved the cold to get an outdoor ride in on her bike.  Sunday she got out of a warm bed to go to her running club.

I wish I had her dedication to getting up in the morning on her day off and getting her exercise in.  I am beginning to think she may just want to get up and out of the house while I am still sleeping and thus not have to deal with me in the morning...but that can't possibly be true.

And another big announcement. I am no longer being coached by Sonja Weick. She did an awesome job for me last year..especially with all of the injuries I had.  However, she has decided to cut the number of athletes she has down.  Thus I have entered into an unholy alliance with Maine Jen...Yes...That girl... 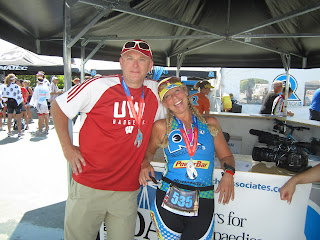 Jen and I click on a number of levels and she is not afraid to call me up and kick my ass in regard to training, nutrition or letting my hair get too long.  She is also one of the few people in this world tat appreciates my sense of humor.  And although I kid around a lot about her she is an amazing athlete and has made HUGE strides in the last few years getting to where she is at.  We also have decided to do Cedar Point together...ok.... We will start the race together and she will finish 3 hours before me...but at least we will be at the same venue.  And heck..I may be able to convince her to be my adventure race buddy in the future.  So Jen is now an official member and coach of team Abekat Anarchy!  I'll still b seeking advice from the people in the know about nutrition and swimming and a hundred other things..and I see 2013 as my breakout year.  (And maybe the year I am actually in the 100s again.)

Now if she would just stop calling my beloved University of Wisconsin peeps "Beavers".

Hope everyone has a great week!! And to all my friends on the east coast..including Connecticut, Maine and Jersey Jens and their families...please stay safe and dry!!