I decided to go shoe shopping on Tuesday for a new pair of cross trainers since my schedule states that I should be in the gym lifting weights.  All I really have is running shoes. Based upon some recommendations from Jen I started my quest. We think that some of the foot issues I have are from trying to weight lift and do lateral movements in my running shoes.  Thus we wanted something with more stability.  She was awesome, giving me a list of 5 shoes..all of them in Badger Red (or close to it).  How hard is is to find cross trainers?  Well apparently very hard.  I called a number of running shoe places and they did not carry cross trainers at all. Then I went to Kohl's, DSW, Sports Authority, Famous Footwear, Off Broadway.....and they either did not have any at all or one's that did not fit correctly.

I finally stopped at Dick's and found a pair of Reebok Real Flex transitions. 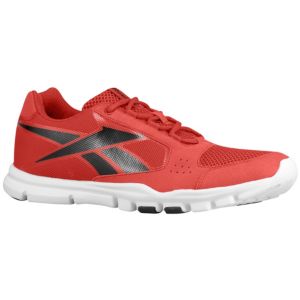 They only had a size 14..and the damn things fit.  How did my feet get so huge?  They must be spreading from the weight they have had to support over the years.  Anyway, the whole purchasing experience made me feel less than stellar and a little long in the tooth.  First of all a little 20 year old sales girl bounds over to help.  She saw me staring at the wall of shoes and asked if I was looking for walking shoes?  What the heck!!  Where did that assumption come from?  It may have been the fact that I have not shaved my head again thus the grey was showing..or the fact that I had to put reading glasses on to try and find the sku numbers on the price tags..but do I really look that old/out of shape?

I explained to her I was looking for specific styles of cross trainers.  She then picked out a pair of all white tennis shoes. (Yeah..I just wrote "tennis" shoes).  I then tried to explain to her that I was going to actually "cross train"..you know..run..weight lift..etc.  So she finally picked up a pair of crossfit shoes and proceeded to tell me about crossfit.  I told her that I knew what crossfit was and had actually done it for a few months.  Apparently this did not register..or more likely she didn't believe me and continued her explanation.

So I tried the the crossfit shoes on as well as the Real Flex.. I was torn because they were so different but both fit very well..so I decided to call Jen to see what she recommended.  I took out my phone to call and ended up going through 5 screens on my smart phone just to find the phone app.  The salesgirl than said..."My dad had to dumb down his phone so he could figure out how to operate it."  At that point I did not know whether to laugh or beat her with a shoe box.  Fortunately for her this was the only place in town that had the shoes I needed..so I refrained from the beating.

I paid for my purchase and saw a good looking woman my age coming to the door as I was exiting.  She stopped and held the door open for me..I thanked her..wondering why she held the door open..and she said.."no problem sir."    I would have stopped to ask her why she said that..but was late for my optometrist appointment.  The good news is that my bifocals are too strong and thus the new prescription was actually weakened.  The bad news is that I wear bifocals.

After the eye doctor appointment I headed home sat on  the davenport, grabbed the clicker...and turned on the t.v..  Of course Kristine had it tuned to the Hallmark channel and the first thing I see is Murder She Wrote.  Obviously the Universe is trying to tell me something.  Maybe its..use your shoes boy and get off the davenport!!