From Fat To Finish Line


Hello Everyone! I hope you are all enjoying this fall weather, the beautiful colors (In Colorado it is "color" yellow) and college football.  This is a great time to run and bike..except for the fact it is too dark out once I get home from work to do either.

As most of you know I met some people while I was in Maine doing my race that are producing a documentary film based on twelve people who have lost a bunch of weight and are now poised to do a Ragnar Relay from Miami to Key West together in January of this year.  The running relay is over 200 miles in two days.  The film introduces you to the people running, discusses their stories dealing with weight loss and will follow their race.

The main people behind the film..Angela and Jen (New Jersey Jen)..are wonderful people.  Further, My friend Jen(Maine Jen) from milesmusclesmommyhood.com is one of the featured people.  New Jersey Jen is also in the film and you can find out more about her and her weight loss journey HERE.

Below are pictures of some of the runners from competitions that they just did today.  By the way..A HUGE shout out to Maine Jen who competed her first marathon today in 4:15..awesome job Jen..Especially considering that a few short years ago she was not at what we would call a healthy weight. 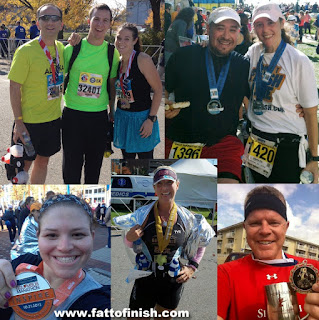 The long and the short of it is that I can relate to the people in the film and the struggles that they went through and continue to go through to live healthy lives.  The team captain is even a Badger from the great state of Wisconsin.

The film is looking for contributions to make it a reality. Most of the preliminary work and interviews have been completed but there is a long way to go to complete the project.  The film originally looked for funding on kickstarter but the goal was not met and so the film did not get any of the contributions and none of the contributors were charged.They have now changed their funding to the link I have below..and they will get the contributions whether or not their goal is met.  So I am asking that if any of you have a few dollars to spare to think about contributing to the film. Of course if you contribute you will get perks and rewards depending on the size of the contribution. Everything from t-shirts to a DVD of the movie with special extras to an Executive Producer Credit if you come up with the big bucks.

Click on this link for more information..From Fat To Finish Line.

Of course..everyone is waiting until the last minute to contribute so please make your contributions within the next 48 hours if you are going to do so.

Although the film will be incredibly inspirational..the real reason to support it is that my daughter may have a cameo appearance.  I think they will be pretty good at cutting my ugly mug out so you do not have to worry about that.  Also, just think about what it is going to be like for these people to be stuck in a van with Jen from milesmusclesmommyhood for two straight days during the race in order to complete the film.  Now that is devotion to a cause.