Well we finally made it back from our trip to Maine for the Rev 3 race.  I must say that it was one of the best races/vacations that I have ever had.  We had so much going on the last 11 days that I will probably write a few posts to cover it.

To start with, we left for Maine on August 23rd via Newark and then Portland.  We were to be met at the airport by Evil Jen. Although Evil Jen and I have corresponded and talked I had never met her..so I was hoping she wasn't actually some psycho..much to my surprise she was fairly normal.  Not only was Jen at the airport to meet us but also her 3.5 year old daughter and her training partner Marc.  If anyone actually reads Jen's blog they know that she takes lots of pictures while training..most of these pictures are taken by Marc..thus he is never in them.

We knew we would like Maine since we saw all of the beautiful greenery and trees as well as the rivers and ocean when we were flying in.  Marc and Jen also seemed to be nice people. After hanging with Marc and Jen for a while we left the airport and went to the hotel in Saco Maine for the evening. I was amazed by the vast number of Canadian license plates and French being spoken at the hotel. I then realized that Maine is actually Florida to the Canadians.

The next morning I awoke to a facebook message from Jen inviting us to go swimming in the Atlantic Ocean.  We went down to where the race start was and prepared to jump in.  With Jen and Marc was Jason.  Jason is a blogger and has become an accomplished triathlete. He was also meeting Jen for the first time.  Jason is originally from New York but lives in Texas now..thus the 64 degree ocean waters were a little chilly for him while they felt perfect to me.  I only had two issues with the swim course. 1. I was taking in gulps of salt water when I got swamped by a wave..disgusting and disorienting. I made note not to do this on race day.  2. The buoys were going to be on my left side for the whole race..I breathe to my right...During the practice swim I was able to swim out to sea while everyone else stayed on course.  I hoped that there would be somebody slow enough for me to follow on race day.

After the swim we all piled in the car and headed to breakfast. Jason and I talked about how friendly the Maine people were..but that we couldn't understand a word they were saying.  Apparently if there is an "r" in a word it is silent and if there is not an "r" you are supposed to add one.

After breakfast we got the group together to head to one of the fantastic sand beaches and do a little r&r. I must say I was really amazed by how beautiful the beaches were. 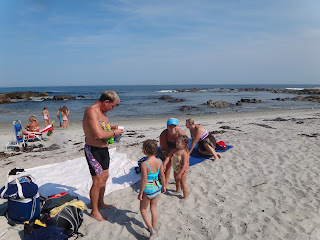 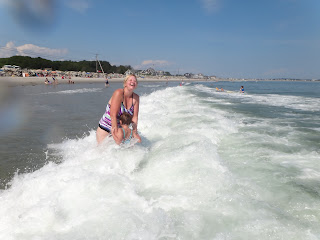 We ended the day by going out to dinner.  At dinner I met Matt and Heather who are also bloggers and were doing the race. They are actually from Ohio..so my four year old discussed the fact that a Badger is a much superior mascot to a Buckeye.

Everyone went home after dinner to rest up except for me and Marc. We unpacked my bike and spent the next two hours putting it together.  It should have probably taken us 30 minutes but we were both tired and not seeing straight. Luckily everything seemed to work.

I also want to mention Angela and New Jersey Jen (not to be confused with Evil Jen) who I met on the first day.  NJ Jen has a blog (Has everyone made the connection with this group yet?) and further has lost a ton of weight and began running. Not an actual ton but close enough.   Read her blog (yes click here) and you can get all of the details.  Anyway, Jen and Angela came up with an idea to do a documentary film which would track 12 people who have lost a significant amount of weight and have changed their lives.  Those twelve people..pretty much strangers to each other, would do a run relay in January covering 200 miles.  Evil Jen was chosen as one of the twelve and NJ Jen is also going to run.  The name of the documentary is called From Fat to Finish Line.  Angela and Jen were in town to meet Evil Jen and do some filming.  They also turned out to be two very cool people.  And since they are such cool people and have a great project I would ask everyone who reads this to check out their fundraising page for the film on kickstarter by clicking on this link..kickstarter fundraising page.  If you can, please become a supporter of the project.  The people that I have met that are involved in the project are just wonderful...yes even though Angela is from L.A. and Jen is from New Jersey..they are still down to earth and funny.  Further, the 12 people that they are highlighting are very inspirational.


I hope everyone is enjoying their Labor Day weekend and I'll actually get to the race in my next post.
Posted by Scott at 11:16 PM