So I thought I would do some reviews for the places we ate at and visited during our trip out East.  The rating systems is based on monkeys with 5 being the best..because obviously the more monkeys the better.

United Airlines - what can I say..there is a reason I do not fly United unless there is no other option.  I am so glad I did not believe the representative who told me 35 minutes between flights was enough time for me to deplane in New Jersey and switch planes.  You forgot to mention that I would need to take a shuttle to get to a totally different terminal.  Fortunately we took a 5 a.m. flight and had three hours to sit at the wonderful New Jersey airport.  While there we changed gates no less than five times and had to get on the shuttle twice to change terminals.  If Orbitz had not texted me that there were gate changes we would still be sitting there. Oh..and they had a line for first class passengers and one for peons for getting on the 80 passenger plane to Portland. The first class line had a mat to walk over and the other line did not.  They actually yelled at a guy for making the mistake of walking on the mat..even though all the "better" people had already boarded the plane. Seriously?  United gets 2 out of 5 monkeys.

Portland Airport - This airport rocks..it is tiny and the first thing you notice getting off the plane is the white wood Adirondack chairs scattered around the airport for you to sit in.  I also may be biased as this is where we met Jen, Lola and Marc.   4 out of 5 monkeys.

Hertz Rental - Norwalk.  Yeah. went to return the car. Walked into the office and there is a sign on the desk which says "Back in 15 minutes". Some other woman said she had been waiting there for 20 already.   So we put the keys in the drawer..put our number on a post it note and left.  Most painless return ever..although I have yet to see the bill.  3 out of 5 monkeys.

EATING ESTABLISHMENTS I put on 10 pounds in the week following the race since I finally had food I love instead of the CRAP that I have eaten in Denver.  Heck I did not even see one mexican restaurant and the chains were few and far between. For the most part, every place we ate was privately owned instead of the chain food I am used to and there was actual Polish, Italian and German restaurants and bakeries. What a concept.


The Run of the Mill Public House and Brewery - We ate there on Saturday night before the race. We sat on their outside patio with a view of the river.  The food was adequate and the staff was friendly-ish.  Although we did have to refill our waters ourselves more than once.  What really gets me is that this place had an inside and outside menu which they did not explain to us before we were seated.  I have not idea what this is all about but do know that the specials they were running were more expensive outside than inside. Really? I should pay more to sit outside with the pasty white Canadian tourists? With the other options in Saco and Biddford I would not go back here.  OH..and apparenlty the dress code for the waitresses is that their shorts can be no longer than the 4 inch apron that they wear. This was both a positive and  a negative depending on your server.  2 out of 5 monkeys.

Pizza By Alex - The number of pizza places in Maine was stagerring, only outnumbered by the places where you can get lobster rolls, which included citgo stations. Unfortunately most of the pizza places serve NY style which I find disgusting.  Luckily my buddy Casey turned me on to Pizza By Alex.  They serve smallish pizzas but they were down right awesome.  The place is a hole in the wall across form the Biddeford Post Office but the food hit the spot.  4 out of 5 monkeys.

Brewhouse - Norwalk Connecticut - We ate at a number of other places but by far and away the favorite was the Brewhouse in Norwalk.  Yes I may biased since our friends Jen and Lou are part owners but the food really is amazing. Plus they have a ton of beers.  We ate here many times and I had scallops for the first time along with risotto.  I also had pasta and learned a new word.."aioli".  However, the brunch was amazing. Yes the natives were drawn to the clams, oysters and salmon..but I ate half my body weight in corn beef hash and eggs Benedict.  Unbelievably good. If you are ever in the area you need to stop by. The food and service is impeccable. 5 out of 5 monkeys.

Seven Seas Whale Watch - Gloucester.  This was a blast. The trip takes four hours total and we saw a number of whales.  My understanding is that on many of the trips the whales come right up to the ship. Being later in the season we did not get within a few hundred yards but it was ton of fun.  Plus the city if fun to hang out in for an hour or two....max. 4 out of 5 monkeys. 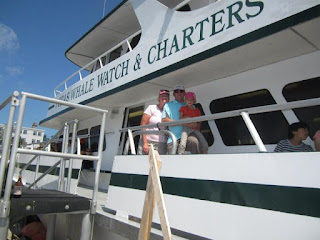 Norwalk Aquarium - This was a fun time which took about an hour to go through. The exhibits are informative and there is interactive stuff for the kids.  The only downside is the price of tickets for the number of exhibits. 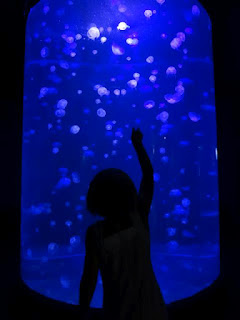 Jen and Angela - This was by far the best entertainment of the trip.  We went to dinner with them at Wormwoods Restaurant (3 out of 5 monkeys) in Biddeford and were totally mesmerized by there stories. Angela's life stories were hilarious..until we found out they were all true..and then we kind of just felt sorry for her.    Jen was the physical comedian of the duo.  Her attempt at eating lobster was worth the price of the dinner alone. Definitely 5 out of 5 monkeys. 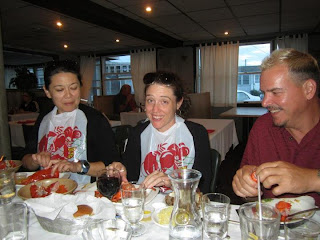 So - if you are ever nearby any of these establishments you can rely on my 100% accurate reviews.  Of course the Jen and Angela show travels around a bit so it may be hard for you to catch that act.