So I am actually training and eating somewhat decently...and being fairly consistent.  I was at the pool last week during my lunch hour when I stopped at the end to play with my garmin. (Yes..my actual garmin..it's not a metaphor)   The guy next to me was a little older than me and had also stopped.  He looked over at me and asked if I was listening to music while I swam.  I was wearing my Swimp3 which I love and told him that the music was the only thing that kept me going in long workouts. (Note- this was not a long workout..maybe 1000 yards). I told him how much I loved the swimp3 and gave him my goggles and the swimp3 to try on.  He put them on and went under water to listen to the music.  When he came up he told me how great they worked and that the song I had on was awesome.  I was listening to Sexy Bitch from my newly made Chuck soundtrack when I had handed it to him. I told him that the song really pumped me up and he agreed that it was definitely motivational. A woman in her late 20s was in the lane on the other side and had been listening to our conversation.  She had heard the guy say how great the swimp3 and the song was so she asked to try it. So I retrieved it from the guy and gave it to the girl..who put it on and then went underwater to hear it. She came up with a weird look on her face but said the sound quality was great.  She then swam away quickly.  I put the player back on to finish my workout and noticed that the song had changed to I feel pretty.  Apparently the woman thought that we had been raving about how I Feel Pretty was a great motivational song..(which it is in its own right...and do not question my playlist).  Sexy Bitch..I feel Pretty..Everybody Loves me...yeah..I have an ego problem..so what.

After I got out of the pool..I went to the locker room to take a shower and saw this sign... 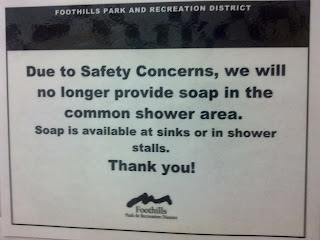 Seriously?  Safety Concerns? Its not like it was bar soap and you had to worry about dropping it.  Did someone actually complain because the shower was too slippery from soap being on the floor?

I even got my long run of the year in over the weekend..ok it was a run/walk..but it was 5 miles.  I knew I was going to watch football..even if it was two crappy AFC teams.  I am not a fan of the hometown Broncos but will root for them for two reasons.  One, Wisconsin Alumni Montee Ball is playing for them and Two.. I hate dealing with Broncos fans after they lose a game.  Those are the only two reasons. So I decided to go to the gym and watch. 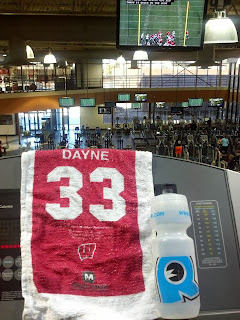 This saved me from abut 5000 calories of "football" food and a sore on my butt from not moving off of the couch for 6 hours (I had already watched the NFC game).  As you can see I had the gym to myself. One interesting public service message came over the t.v. from the good folks at Ballys.  It said.. Remember to wear clean clothes to the gym and have good hygiene....because you never know who you will meet.  Yes, seriously...don't say because of health issues or the fact you smell.  Ugh.


For anyone who missed my facebook post..you definitely need to read this.  Beware of Sugarless Gummy Bears..but they are good tasting.   Seriously..You will laugh your butt off.. and it is pretty much an accurate description of what I go through every time I dehydrate and then drink gatorade or Coke. At least these guys didn't have a security guard pounding on the bathroom door.

If anyone is looking for a free training log I always send them to beginnertriathlete.com.  It is great. And if you pay the small annual fee you get a multitude of options.  However, if you are a coach looking for a log for your athletes where you can input the training plan and make comments your choices are limited.  The one and only choice for a long time has been Training Peaks.  It is a good program but very expensive..especially for coaches.   That is why I was happy to hear about Final Surge.  The website and log are just getting started and the owners are making changes all of the time. In fact they have emailed me for my opinion on a number of issues and have been working with my Coach to add elements every day.  For coaches this site will be a game changer since it is so inexpensive compared with Training Peaks. It is free for everyone else to use and when it is all done it will rival Beginner Triathletes log.  (BT has no option where a coach can add plans).  So if you are looking for a log try Final Surge and keep coming back as the improvements continue.  And if you are a coach you definitely need to check it out.

I was going through some of my old photos and found this classic from my sister's wedding of me and my two brothers.

Well the days are getting longer meaning race season will soon be here.  Coach Jen has me working on my base and is setting my heart rate zones.  She has also promised that she will teach me how to kick so that I don't go backwards in the pool.  Seriously, if  I use a kickboard in the pool I either don't go anywhere and sink..or I go backwards...my daughter enjoys pointing this out to me and laughing.

Jen has also set up a nutritional plan for me..and with the help of my wife preparing great salads in advance I have been moving the scale in the right direction. I am starting to feel pretty again.
Posted by Scott at 10:11 PM