Where do I begin?  Oh..it's already September..the kid is already in school and the majority of my friends have either raced their "A" races or will be doing so in the next month. The Badgers started out there season with a 45-0 victory and my daughter is already addicted to college football. And just a side note..I have no idea what parents complain about as far as getting their kids ready for school.  My kindergartner gets up in the mornings..gets dressed..does her hair and then wakes me up.  What's the big deal?

August was a mixed bag for me.  I was supposed to spend the last two weeks in Maine and Connecticut racing and vacationing but unfortunately work got in the way.  After the horrific year I was having I was really looking forward to getting out of town..and more importantly seeing a number of friends I have not seen in a year and meeting up with new friends.

That did not happen.  So I tried to make the best of it.  I followed Angela as she did her first ever Olympic distance race at Rev 3 Maine.  She managed to fight off the sharks in the Atlantic as well as  do the run in a tutu to complete the distance. 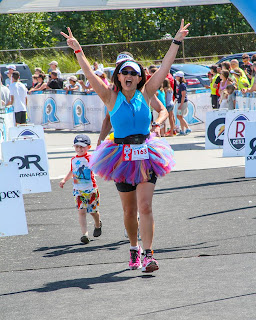 My friend Keely, who shares my same twisted sense of humor,  completed her first 70.3 distance race, also doing it at Rev 3 Maine. 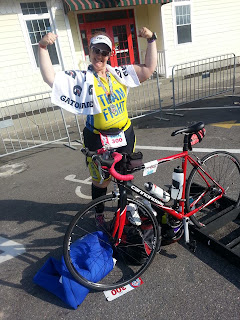 Jen and her husband Casey competed in the halfrev relay and took 2nd.  Jen's bike split was insanely fast.  Not bad considering just last year Casey and I were talking at the finish line and he was telling me how he would never be caught dead in spandex.  (At the time I could see why..Now after a year and a miraculous transformation from a couch potato to a true athlete I worry that he believes he looks "too" good in spandex) 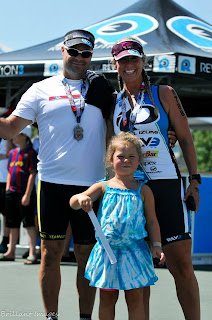 I also had friends and teammates from Kompetitive Edge compete in Ironman Canada. I followed them on Ironmanlive. (OK I checked in..seriously I love my friends dearly but I am not going to stare at a screen for 12 hours unless it is college football..and those of my friends and acquaintances who get all amped up and actually do watch 12 hours of "coverage" on their computers.... I got nothing..seriously..that borders on sad.  With that being said I happened to time it just right to watch the Small family come across the line at Rev3..and that was pretty awesome).  Anyway.. I followed Christy who was racing although she had trained little due to a knee injury.. and Jen S. (not Jen Small..how many Jen's are there??..this is Colorado Jen I am talking about) who was racing to beat the clock.  Christy made it through 127.5 miles on her bum knee but said it was her most rewarding Ironman.  And Jen finished 10th in her age group with a time of  just a little over 11 hours and 14 minutes.

I read the race blogs of the athletes and was intrigued by what each person took from their race and experience. I think I was most impressed by Keely since she was just so dang happy to finish and loved the experience. I couldn't be more proud of her.  BTW..Rev 3 is awesome..they make the last finisher feel like one of the first across the line..and they also have an athlete stay with the back of the packers to make sure they have  support the entire way and that athlete actually finishes last at every race.


The long and the short of it is that all my friends have reasons for competing and training. Reasons that make them happy. I realized that since my training has been limited so has my happiness.   Our best family vacations have revolved around races the last few years..most recently races my wife has been running.  Plus, I have realized that the majority of my good friends are either those I have met through the sport or those that have supported me.  The long and the short of it is that I have to make room for the sport in my life.  As some of you know it is hard to do when you have a family and full time job..but even with that being said the sport can bring families together if done right.  My daughter loves doing triathlons and just exercising in general.  We will support her in whatever sport she chooses..(Although I am a firm believer that kids should belong to team sports first and foremost..no need to be raising little self important d-bags right from the get go.  I'm sorry... is my bias showing through).  My wife is also really enjoying the sport.


The events of this year and most recently this August have helped me to realize I must prioritize things in my life. In order to do that I need to make changes.  Changes that are occurring as we speak.  Directv has already felt my wrath and there will no longer be television in the household outside of an antenna and possibly netflix.  (Yep I feel like a freaking dirty hippie without the t.v.  and where am I going to get fair and balanced reporting now that I no longer have Fox News Network..I'm being serious people)  I also cut Verizon out of my life last week..oh the changes...I'm looking at you Centurylink.  The family has decided to prioritize health and happiness over some of our creature comforts.  Things that in the long run really add to unhappiness.  I'll update you as more changes take effect.

As part of the changes in attitude and instead of continuing to be bummed about missing my friends out East the family took a day trip up to Wyoming to check out Cheyenne and Curt Gowdy State Park on Sunday.  We had a blast hiking and checking out trails.  Curt Gowdy State Park is only about 2 hours from Denver and has some awesome mountain biking trails and has incorporated some bike "play" areas into the trail design. 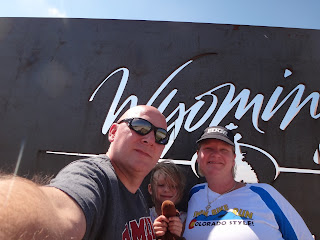 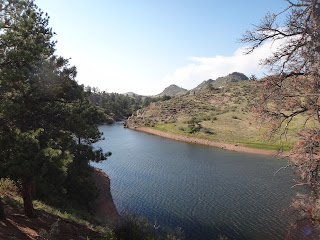 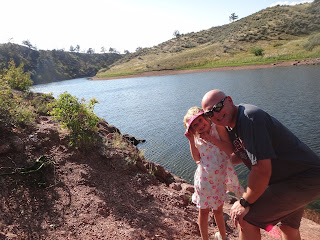 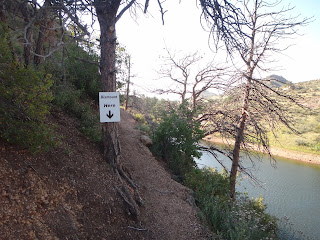 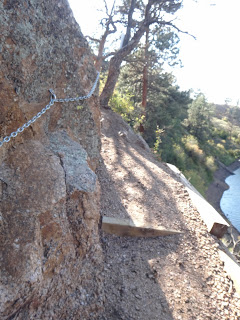 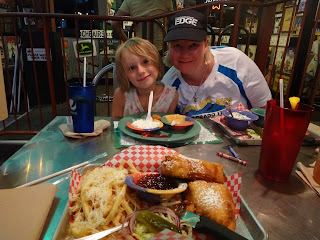 The trip to Wyoming was great..although when we got to the Welcome Center I was having second thoughts.  The Center itself is beautiful with a ton of information and exhibits.  However, the people using the Center were a bit scary..looking and acting.  My daughter wanted to know why everyone was playing cowboy with their hats and boots on.  And apparently daisy duke shorts are perfectly acceptable..on anyone.... of any size.... or gender.  Yep..nuff said.   The staff was "Cowboy" nice.  The woman at the desk told my daughter in a  a very gruff voice.see me after you are done looking at the exhibits..I'm thinking..wow what did we do.  When we came back to the desk after looking at dinosaur bones she gave my daughter a brown stuffed horse...and then said goodbye in a tone with an undercurrent of ..thanks for stopping by..now get the hell out of here.

However, the Wyoming peeps have to have a little Wisconsin heritage to them based on the restaurant we ate at. We stopped at Sanford's Pub and Grill and I was delighted to see that even under the chicken portion of the menu they had a sandwich named the "angioplasty".  I ordered up a monte cristo and could not even finish it. (Ok..I could have finished it and you all know that..I chose "not" to finish it..until breakfast this morning) The kid's meal came with a gummy worm in the applesauce and I ordered a hurricane which was pretty much just a mason jar filled with alcohol.  As we were leaving at about 8:30 p.m. families were still coming in with their toddlers and elementary school kids..reminded me of Northern Wisconsin..except for all of the boots and cowboy hats. In the truck on the drive home I was thinking about how I could drive the 90 minutes each way to watch football games there on Saturdays and Sundays..I mean..I don't have directv anymore..and the prices were super cheap..not to mention they had a t.v. in the bathroom stall.  Come on Golden..take a hint and get a decent eating establishment like this instead of another freaking Mexican or Thai restaurant. Ok..it is honestly a good thing that his place is in Wyoming.

This morning the family took a nice bike ride at Waterton Canyon.  The sun was blazing hot and for some reason I was sweating grease.  Getting outside and enjoying the exercise and nature was wonderful even though it was hotter than a monkey's butt.   (My daughter actually reprimanded me for my use of the phrase "  ______er than a monkey's butt" which I am fond of using.   She stated.."Dad..a Monkey's butt is not hot or cold or funny..it is just a monkey's butt".  After a lengthy discussion she did agree that monkey's themselves were funny but that the "butt" was not so on its own)  My wife did have a few choice words about having to take my car..which does not have air conditioning..and in which I tend to leave food and clothes for an extended period of time.  Apparently my daughter and I have become accustomed to odor..

My wife and I are contemplating a tri in October in Western Colorado. An off road for me and a road tri for my wife.  We will discuss it and if we believe it is a priority we will make it happen..along with the necessary training.

I just want to say good luck to Jen Small who will be racing her first Full Rev (Full Iron distance) race next weekend.  Kill it Jen..I'll be watching on my little computer screen..since I don't have t.v. anymore.