Well yes it can!  Obviously the one thing we all hope for when we check voicemail is a message from our doctor to make an appointment to come see him.  And that is exactly the message I got.  So I immediately made an appointment the next day.  I had not seen my doctor in about three months so I figured he was just jonesing to see me..I me who wouldn't be?

When I called to make the appointment the receptionist knew the sound of my voice and said..Scott what are we seeing you for..did you crash your bike again?  I told her that I had a message and I had no idea why I was coming in.

So I get to the doctor's office, go to the exam room and the nurse says I'm looking much better than the last time I saw her..and tells me that the doctor wants to see me about my heart exam I had three months ago.  Cool, we had gone over it and the echo had shown my heart was strong like bull.  Well apparently I also had tests done on my arteries.  She gave me the print out to review before the doctor came in.. I read it and it actually looked pretty good..I am 60 with the arteries of a 45 year old.  Sweet..Until it dawned on me that I am actually 45 with the arteries of a 60 year old.  Wth!!

When the doc came in I did not ask him why it took three months to tell me about the results. (This is the same doctor who had me go in for an MRI to make sure I didn't have an aneurism...and a year later at my physical took out the report and said..oh..they found something..well..apparently it must have been from an old car accident or something..I mean you are still here after a year.  I had to admit it was sound reasoning)

Even though my cholesterol is the best it has been in years the plaque is building. My bad cholesterol was the only thing that was a tiny bit above where it should be. Apparently I have two things to thank..my diet and my wonderful genetics. Yes not only do I have the wonderful hairline and child bearing hips..I also have blood that is as thick as molasses.  I was pretty bummed but nothing could prepare me for what the doctor said next.  "Have you ever considered becoming a vegetarian?"  Really did I just hear this?  And not only a vegetarian but one who does not eat cheese.  Well yes doc..I consider becoming a vegetarian a lot..about as much as I consider giving Roseanne Barr a sponge bath.

So in continuation of my last blog's theme of "change"  I now have to seriously change up my diet.  The genetics just cannot be toyed with any longer.  Yes, I will no longer be going through 5 pounds of cheese in a week..nor stopping at Sonic for the 50 cent happy hour corn dogs.  And apparently sunnyside up eggs are now out of the picture since there will be no yolks in my future.  Yes basically I can eat fruits, vegetables, chicken (but not the good fried kind) and fish.  Doctor wants red meat and pork out of the picture for a while.

Well I have made it through the first week and am none the worse for the wear..although I am running out of things to eat.  Sunday I will actually put together a menu for the week.

And for those of you wondering.  I did make it through the first week without T.V.  I watched the Badgers on my ipad and hooked the ipad to the T.V.  The Packers were on Fox. Further, I have found that the shows on regular television are so mind numbingly terrible that I am not watching T.V. at all. Seriously..last night there was a game show where a guy guessed that there were 22 ounces in a pound. I guess I am supposed to know who the host of the show was but I have no idea and could care less.  This show was followed by a show where celebrities play pictionary and drink..Who the hell watches this crap?? (Ok I know you do Keely) The only show I was every remotely interested in with celebrities was celebrity death match..and unfortunately that was fictitious.

Oh,  and you know how everyone was praying for rain during the wild fires?? Well apparently God must have comcast for funneling those prayers since much like my emails there was a delay in receiving them and he answered them all at once.  In a state that averages 16 inches of rain a year there were a number of areas that received 10 to 13 inches in two days.  Since the sewage infrastructure in Colorado consists of digging ditches to large holes and no such thing as actual sewers this posed quite the problem when all of the ditches and holes overfilled.  And of course my basement..that I just redid two months ago..also flooded. Although I  don't think there is any damage which we will need to replace.   Oh and since nothing in this state knows how to deal with moisture..the three days of 100% humidity caused all of the rubber on my steering wheel to start coming off on my hands and falling into my lap.  I would get to work and my hands would be completely black and the front of my khakis would be covered in rubber.  Today was the first day the sun has been out in a week..it dried up and now the surface of the steering wheel is as solid as it was.  (I know there is some scientific explanation for this..but I have no idea what it is.

There was some exciting news.  I got  a new bike.  A Gary Fisher HiFi Pro full suspension 29er. not only did I get the bike but I got it for under $1,000.00.  Sweet. I love craigslist and desperate sellers. 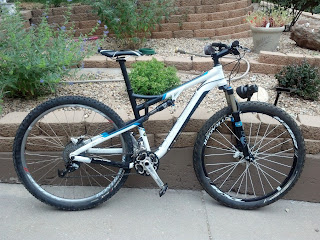 I also want to say congrats to my friend Jen who completed her first 140.6 in just over 12 hours..Way to go Jen!!  You can read about her exploits here.  Jen's blog

That's enough for now.  Oh I also signed up for Ironman Boulder.  So I have until the beginning of next August to get back in Ironman shape.

Get your bets in early.  Some of the most active bets are the over/under on porta potty stops at 5.  Over/under on finishing time at 16:59:58 and what will take me out of the race  Bike crash 40 to 1; dehydration 5 to 2; and forgetting my running shoes at 6 to 1.

Happy Trails everyone.
Posted by Scott at 9:49 PM