I hate it when real life is so real

So..I have not posted in a while..I'm going to use that excuse of real life getting in the way.  I haven't trained much either.  Triathlon and training is kind of a fun diversion and hobby..but in my life it definitely takes a back seat.

Three weeks ago I lost my Uncle.  It came as a complete surprise.  I received a call Monday morning that he was in the hospital. I flew out that afternoon and got to the hospital an hour before he passed away.  I was not ready for this..especially only two months after my mother's passing.  And especially since both him and my mother were so young.  Uncle Tim had always been  a big part of my life..especially when I was younger.  He is where I got some of my sense of humor (for good or bad)  He coined my nicknames..Leonard Lardass and melon head..which I use today with pride. And taught me how to be completely un PC.


Needless to say everyone was stunned but the family came together as always.  Three days later as I was about to head to the airport to return to Colorado we got the call that my parent's neighbor of 40 years had also just passed away.  2013 has been shaping up to be just a stellar year.


A week after I got back home my brother and his wife visited.  They had not been to Colroado in 8 years..and honeslty it was just super comforting to have family staying with us.  They actually convinced me to take a brewery tour..which you all know I hate beer..but it was actually fun. It was the New Belgium Brewery in Fort Collins. They make the classic Fat Tire.  I did not care for the standard beers but did like.. the Trippel and the Transatlantique Kriek ..yummy..cherry flavored.  No one else liked the Kriek except my sister in law.  She has good taste.  Of course my wife and Ben loved the hoppy beers..

They ended their visit with a hike at one of our favorite local places..Lair o' the Bear.


That same week Ben and Adrianne were visiting I had my physical...Cholesterol...best the doctor had seen for me and well within good standards for anyone!! woo hoo. Uric Acid under control!!  Vitamin D close to normal.  Excellent physical..best in a while.  Oh..let me listen to your heart.  Umm.  we need you to come in for testing..What?  Apparently there are murmurs that have not been there in 14 years.  Of course the tests were a week away.  I completely freaked out.  I didn't want to train or raise my heart rate.  Even at night I would listen to my heart as I lay in bed..hearing the murmur and the elevated heart rate...at least in my head.  Based upon my family history as well as recent events all I could think about was the worst possible scenarios.  And of course my sister in law the surgeon tried to reassure me that it was probably nothing..but did detail the worst possible scenarios.  The test was on Thursday of last week and I will have the results next week sometime. I was able to get the tech to divulge what she saw..even though she was not supposed to.   According to her there was nothing of real concern..I am hoping she is right.  I also convinced her to run an additional test on my arteries that I was not scheduled for..don't know who is going to pay for it..but it is done.

Just an example of how freaked out I was by the upcoming tests..I bought a new 29 inch mountain bike on the day before my physical.  I have yet to even put the front tire on it and ride. 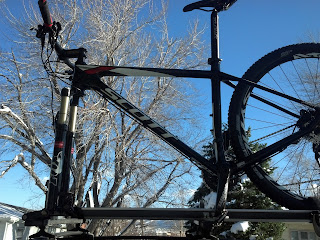 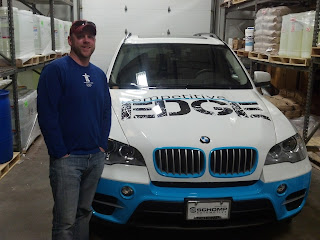 By the way..the new bike is still a bit of a controversy..I have had experts weigh in on both sides regarding a fat ass like me riding a carbon frame. Ryan at KE says it is perfect for me..while others I know are taking bets on how long I have it before I snap the carbon.  My friends Jen and Scott Think it will be about the fifth ride.   I'll give a review of the bike when I actually ride it.

To add to the rest of the issues that have plagued me the last couple of weeks our basement/bedroom flooded necessitating that  I remove the carpet..drywall and wood burning stove.  I am still in the middle of this project.

Like I said. 2013 has been a very hard year.  The challenges keep mounting.  However there is one thing I am thankful for..my friends and family.  No matter what the challenge there is someone standing with an outreached hand.  Obviously there is my wife and daughter who are there everyday through thick and thin as well as my immediate family.  My friends and extended family like all my great cousins who help mourn and remember the happy times.  Old friends like Trent who just reach out with a hello. Or others like Greg who sees I am back in Racine and extends an invitation to train with him or John to have a drink. Unfortunately I was unable to hang out with any of these guys due to my time constraints..but I will do so in the future..life is short.  Then there are old friends who comfort me..even though when I am training I tend to neglect them..thanks..Joel..Dawn Marie..Todd..August..but they were therefor me two minutes after I started freaking about my heart tests.  I think my brother Ben gave Joel the biggest compliment..saying he felt like he had known Joel for ten years even though he just met him.


And other friends that are helping me piece my house back together like Todd, Steve and Lisa. I also have new friends that give me advice on everything from carbon bikes..to the best pedals to buy..and just listening to my bull crap whining..knowing when to say its ok..and also suck it up buttercup.  As well as all my facebook friends that comment at just right time to put a smile on my face. The last few weeks have also taught me to reach out to others I have not talked to and hopefully become someone they can rely on to talk about their trials and tribulations.

This week I am hoping to connect with some people I haven't in a few weeks..like my coach Jen and training partner Doreen.

So I had to edit my post since I was reminded by somebody about the training injuries I sustained the last two weeks which I should probably update everyone on.  The first was to my left hand..I thought I actually broke a bone in the hand it hurt so bad and swelled up.  I was doing some over exuberant cardio and hit my hand on the door knob in my office.  My 5 year old had challenged me to a dance off on the xbox...Pump It..


Even though I was in excruciating pain I soldiered through and beat her..and then cried it hurt so bad.  However I do think I am over that injury.

I did also injure myself while doing doing a physics experiment.  Apparently if you exert great force upon an immovable object and that object then becomes movable..the force exerted will then find some place else to go.  For example..if you put a pick axe under a layer of brick and then pull that handle of that pick axe towards your jaw...the handle will actually hit your jaw with great forces once the brick comes loose..causing not only great pain to your jaw but also your fat ass to be propelled backwards up and over the rocking chair that you lazily did not move out of the room and onto the tool box and sawzall that you also did not move off the floor and out of the way..finally coming to rest in a heap with a look of astonishment and wondering if you are going to be able to eat solid foods for the next week.

I am still able to eat..which may not be a good thing..but the jaw is still a little sore.