Beef and the beautiful game

So how did the week with the inlaws go? Surprisingly I actually lost another pound instead of gaining.  This is quite the feat considering all of the baked goods which mysteriously found their way into our house. Even though I did not gain weight I did run into another issue.  I actually had a gout flare up.  I am already on a daily med so I didn't think I would have any issues.  However my right foot started hurting on Monday and then the pain switched to the left foot on Tuesday..the same way all my gout attacks have occurred.  If I had to guess what caused the flare up, it was the fact I was dehydrated from my long bike rides combined with my large intake of meat during the week.  Since my father-in-law refuses to eat ethnic food we more often then not ended up eating burgers.  Don't get me wrong..I love burgers and don't need my arm twisted to eat one...or even had pig parts to it...but there was a lot of yummy cow digested while they were here. 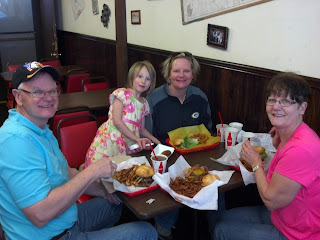 As you can see by the picture..There was an over abundance of beef on my tray.  However, I did eat sweet potato fries..which my coach said were healthy..(ok maybe not healthy).  Anyway..believe it or not I kept the diet in check except for the gout attack burgers.  I even was able to turn down bacon this week in all of its forms.


Instead I ordered this. 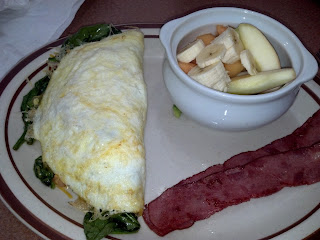 Yeah..I died a little inside when I did this...well..it is what it is.

My daughter started playing the beautiful game this week.  Yes..soccer. I did not play nor did I know anyone who played as a child.  We all played football..softball..volleyball..etc. Thus, I am not a big soccer fan to begin with. Actually, I can't wait to get my daughter into Lacrosse or ice hockey where she can start throwing some sticks around.  However, I did want her doing a team sport as soon as possible and this seemed to be the best option at her age.  I don't want her doing triathlons as a kid and becoming a self absorbed ass at such an early stage of her development.  I am not saying she won't be doing triathlons..she will. But I want that team dynamic first.


I knew that I was in a different world when I went to the first practice.  The parking lot was filled with Prius (what is the plural?  Pre-eye?) and the parents sure did not look like the spectators when I was growing up.  Instead of jeans and sweatshirts they were all dressed like they had just gone out running.  And they all looked like runners.  I'm guessing there was not one ex-football or ex-softball player in the bunch. The atmosphere was a far cry from when I was growing up playing sports or watching my brother's pee wee football games.  At the football games the parents were all screaming and cheering and getting into the game..there is no.."we are all winners"..you know who the winner is by who is still standing and who is on the ground at the end of the play.  We also had a few parents who kept score via beer cans. At soccer the parents all watched quietly from the sidelines when not participating in drills with the kids.

I was told there was no yelling at the kids during the games.  That's fine..I don't yell at mine.  So I was surprised when within the first 30 seconds of the game I was being reprimanded for yelling.  Apparently telling my daughter to get the ball (she was chatting with someone on the other team) was considered yelling.  Seriously??    However, things improved..and I smiled when my daughter passed the ball..thought that playing defense was the best thing ever..and started to tell her partner where to go to best receive the passes.  The games are two on two and the kids get a ton of playing time..I do think that they are doing this right.

Hopefully daddy can keep his mouth shut and not roll his eyes at Pascal faking a fifth injury because he is tired. WTH...and the parent doesn't say..get up and get your butt out there? My daughter smashed her teeth on the back of another kids head..fell to the ground..looked up and said.."i'm alright' even though I knew it must have hurt.


Anyway..fun was had by all. Laila even came up with a song to get her pumped up before games...Fly like a G6. And scored a goal.  She even screwed with my mind a little after the game.  We were talking and I asked her how she thought she did..she said good..."but we are all winners"   She must have seen the horror on my face ..she just smiled and said.."just kidding".

Speaking of fun..How about some mountain biking!! I have not done this in a  while. So I packed up my bike and headed to Buffalo Creek to do some riding.  Which was fun..until I flatted.. Luckily I always come prepared..with two tubes...the wrong size....which meant a nice walk. Luckily I met some other mountain bikers who gave me a ride back to my car. I put the bike on the top rack and prepared to drive home.

On the way home I came around the corner to find this guy.. 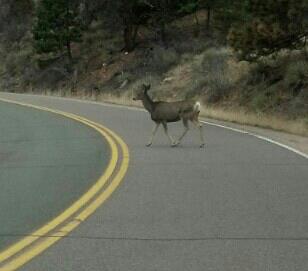 And five of his friends in the middle of the road.  I slammed on my brakes...and got to watch my bike fly from the roof top rack and land 5 feet in front of my car.  As I looked in disbelief at my bike laying on the ground I heard a thump on the passenger side door.  A deer had just walked into the side of my car.  WTH!!  I got out of the car..put my bike back on the rack..and locked it this time..and headed home. Luckily the cost to repair my bike was only $32..some slight adjustments and that was it.


I did go running again..actually a couple of times believe it or not. Sunday my coach had me warm up for 15 minutes before I ran.  Being the overachiever I am I decided to warm up by hiking up north table mountain and testing out my Scott trail running shoes. 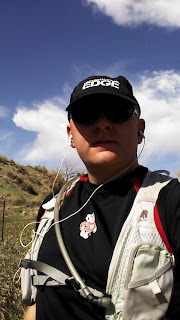 Yeah..being a heavier runner I need to pack a lot of things.for a 20 minute run.....  water... sandwiches.. defibrillator..so instead of looking like a runner I look like I am going off in search of Bin Laden. Next week I am wearing camos to complete the look. Needless to say I am an idiot..the trek up north table was more than 15 minutes and by the time I got back down my legs were so trashed my running was a slow slog..(slower than usual).

The hike up the trail started fine but it soon got crowded. There were actually a lot of mountain bikers.  I usually like mountain bikers..they are fun..friendly..like to train in groups instead of having to do their own "Stuff".  However..somehow the roadie element has gotten into mountain biking. As everyone is aware my pet peeve is people not acknowledging your existence..not saying hello or thank you when you step aside on the trail..etc.  Luckily for the rest of us, these self important people like to wear their uniforms..or "kits" so we can identify them.  I know what you are saying..but that is a generalization..and it is ..but I did a survey on my hike.  I classified a "kit" as a matching jersey and lycra pants..not the baggy shorts most mountain bikers wear.  Riders wearing kits went 0 for 4 for saying hello, thank you..or even acknowledging my existence.  All other riders went 11 for 12.  In fact the greetings included a "Go Badgers" and "F....em Bucky!"  As a side note the kit riders were all riding alone and there were two male and two female. Just sayin..don't need those roadie types on the trails.. A friend asked me..did you actually count?  Yes I did..kept track on my phone dammit.  This is serious stuff.

I hope everyone has a good week..Below are just a couple of pictures from our trip to Estes Park..a reminder of how beautiful Colorado is.