The last week went by pretty quick..as all the weeks this year seem to have.  I did make a few changes..found out a few things and sustained a slight injury.

First..the changes.  Since getting the dreaded gout last year I have been having issues with my feet.  I couldn't run for quite a while and when I did my shoes exacerbated the problem.  I have been running in Newtons for about three years and love them. They transitioned me from a heel striker to a mid foot striker..which in turn got rid of almost all of my knee problems when running. They are also long lasting and built pretty wide in the toe box which is wonderful. Not to mention they are extremely light. I love running in them. Even for a big guy like me the minimal cushioning was not a problem at all.  I would recommend Newtons to anyone who was looking to get away from heavy cushioning and those who are looking to try and get away from heel striking.   In fact if you are interested in a pair you can order them online here  Kompetitive Edge Newton Selection and use my code havn2013 to get 15% off online orders or if you walk in the store.  In fact Kompetitive Edge now has demo shoes you can try before you buy.

Unfortunately the Newtons are not working for me any longer...if you know how the Newtons are constructed..or can see the picture above..the platform is built with a lug system.  That lug system is great for helping a person to mid or fore-foot run.  However, it also sits squarely under where I have been having foot issues..and the increased pressure from the lugs has really caused me problems.  Thus I needed to find a new pair of shoes.  Just my luck Kompetitive Edge started carrying a new brand this year..Scott..I needed a new pair of trail shoes since my North Face pair was over 4 years old..so I purchased a pair of the Scott T2 Kinabalu. 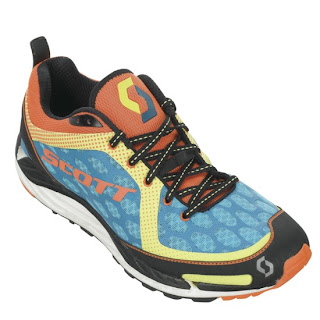 Here is a REVIEW.  I love these shoes. I have only worn them about 3 times but they fit great..and zero issues with my feet.  Better yet..I am still mid foot striking in them and thus zero knee problems.  I will keep running in them and if they continue to work out I will be getting a pair of the Scott MK4 Road Shoes. 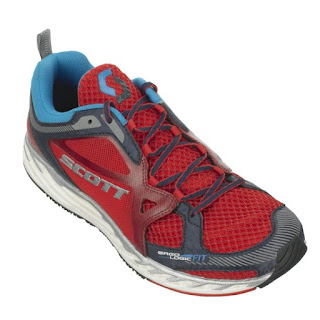 Yes..the badger red of the MK4's is much superior to the Kinabalu's colors..  Either way I am pleasantly surprised with the fit and performance of the Scott shoes..and the fact they personalized them with my name on the side and back..how cool is that. (This may come in handy if I lose one)
Again, if you are interested..contact the guys at Kompetitive Edge..and mention my code (havn2013) for your discount if you do end up purchasing.

The new things I found out this week. 1. My underwear fits better when it is on backwards. (We will not get into how I know this).  2. I am getting to be one of "those" parents. At rock climbing this week my daughter was the only girl without $60.00 rock climbing shoes, her own harness and rock climbing pants.  (This is week 2 of the beginning class!!). She is as tall as all of the other girls and was doing well to keep up. She actually went higher then the other girls on  a couple of occasions. On one climb a girl in the class did go higher and I could see the smug look on the father next to me..so of course I said, "Wow. That's great..by the way where does your daughter go to school?" He answered with the school name and said she was in the second grade along with the other girl in the class.  I of course then informed them ..that's great..maybe my daughter will go to that school when she starts kindergarten next year... Yeah..I'm an ass.  3. Almond milk is not as tasty as regular milk.  It is a lie. 4. I do not miss sugar all that much out of my diet.

The injury I did while working out at the rec center. I tweaked my hip a bit as well as some other things. My coach had me running on Wednesday so I did it at lunch on the treadmill at the rec center.  Since I sweat like crazy I have to shower after any sort of run longer than 30 seconds.  Since I had done 40 minutes I was pretty much a disgusting mess.  I thus went to the locker room and showered.  I came back to my locker with my towel around me and of course there was a guy on either side of me at their lockers. (They give you locker keys when you check in and for some reason the front desk guy thinks its funny to give the lockers out next to each other..thus if there are four guys using lockers they will all be within 4 lockers of each other..even though there are 60 empty lockers).   Anyway, since there are guys in the immediate vicinity I do what I usually do..which is drop the towel and put my underwear on as quickly as possible...of course..I do not want to actually bend over to put them on for obvious reasons..So standing straight I put one leg through and then quickly put the other leg through..except I miss the leg hole and actually catch the underwear fabric with my foot..Now I don't want to step down since the underwear will be between my foot and floor..and that would be disgusting.  So I try hopping..because I still do not want to bend over..after the second hop I realize that I am going backwards and there is no way my momentum is not going to take my naked butt to the floor.  I guess I should not have been concerned about the underwear on the floor or bending over since in the next 2 seconds I have actually fallen over on my butt onto the locker room floor with enough momentum for my legs to go up and flip my underwear 6 feet from me. To make matters worse..one of the guys next to me is naked old guy...so when i sit up on the floor to reorient myself I get an eyeful of ..well lets just say it was not a pleasant sight..probably just slightly less pleasant than the feeling of my butt on the floor (since being male I obviously do not actually towel off when I get out of the shower and thus am pretty much as wet as when I am in it) and wondering what I am actually sitting on and what is going to be sticking to it when I get up.  The other guys in the room do not know what to do..naked old guy goes to give me a hand up..without covering himself..and the slightly less old guy..70 ish..goes to get my underwear..bends over to grab it..then straightens up..grabs a towel and then picks them up for me.  At this point I am just thankful I remembered to pack clean underwear.  I thank both of the guys and retreat back to the showers and take a 15 minute shower to not only rid myself of anything that could have possibly adhered to my body but to also make sure that both the guys had time to leave the rec center.  Anyway..my hip now hurts and I have a weird rash in the nether regions which I need to explain to the wife.  I also will not be doing lunch time workouts at the rec center for a few weeks. I have to think that this crap happens to other people besides me..Right???

Oh yeah..running is improving..stopped the run/walk stuff and am running. Although my heart rate is still crazy high for the slow speeds I am doing (think very slow jog). With the new shoes I have minimal pain while running. The swimming I need to build endurance..but am under 2:00 per 100..and I am beginning to get used to the bike trainer again. I do need to strengthen the hip and quad considerably though. Down 2 pounds this week..not bad but not good..228. down from a high of 235.