I thought it would be fun to camp with the family and race in the HITS Olympic Triathlon.  I was half right.  The race was supposed to occur in Fort Collins but was moved to Sterling Colorado due to the wildfires that took place in June.

We took off work early on Friday and made the two and a half hour trek east on Interstate 76 to Sterling, CO and then North to the North Sterling State Park.  Once at the park my wife and I again tested our marital commitment to each other by trying to put up a tent.  A sudden wind and rain storm made this an even more difficult exercise in patience.


The storm passed quickly and my daughter and I went down to the transition area to attend the athlete meeting.  We were told of rolling hills and a bike course that was suitable for a mid season PR. We were also informed by the race director that the run course was on hard pack trails and that it was a bit bumpy the first quarter of a mile or so. And, if the call of nature were to hit us out on the run that we were not supposed to go in the long grass on the side of the trails. Apparently rattlesnakes were abundant in the area. Lastly, the 200 meters of gravel at the start and end of the bike course were not that big of a deal.  WTH?  Did I sign up for an Xterra?  Being that the the race was moved with less than 30 days notice I decided that HITS should get a pass on most of these things.  My daughter and I went back to the campsite..which was only about a 5 minute walk to the transition area..and went to bed.  I think I may have slept about an hour all night..not due to nerves but due to sleeping on a cot with the wind rustling the tent and being startled awake every time I moved my foot the wrong way. (How long does this gout crap last?)

I got out of bed at 5:30 a.m. to an overcast sky and some of our camp neighbors getting their gear ready to race.  The sprint was to start at 7 a.m. while the Olympic was 7:40 a.m.  Thus I screwed around for a while..walked my bike and gear down to the transition area and arranged everything.  One nice thing about Hits is that they have your area numbered, allow you plenty of space for everything and even provide a stool for you to sit on. woo hoo.

My family came down and I put my wetsuit on by the water's edge.  Now, I was feeling good about myself since on race day I was down to 218 lbs, but then I put the wetsuit on.  WTH? I instantly gained 30 lbs or so.

I lined up with the rest of the male olympic distance athletes, the horn sounded and off we went....walking through the muck for the first 20 yards or so until it made sense to actually swim.  Yuck.  By the way, the water temp was 78 degrees.  I thought I was going to sweat off 10 pounds in the first of the two laps we had to do.  The water was also murky so you could not see anything more than a foot away.  To make matters worse I had to actually sight for myself during the race since I couldn't find anyone to follow.  I think I probably added 200 meters to my swim by going off course so many times.  Now I usually like the swim..but with the warmth, the mukiness and having to sight I was working harder during the swim than I have ever done before.  So at least I thought I would have a decent time. I reached the first lap and had to stand up and walk in the muck to the shore and then out to start the swim again..at which time this dumbass actually twisted his foot in the mud.


When I finally exited the swim we had to run up a sand beach to the transition area. Ok..we didn't have to run..and I think I may have jogged a few feet to the wetsuit strippers.  My time in the water was 33 minutes..I was not overly happy but hey I made it.

I sat on my stool during transition and put my bike gear on.  I had decided to wear my abekatANARCHY shirt since it was nice and loose.  Although the XL fit me fine it was a little tight on my shoulders so I put on the 2xl.  Now I do watch What Not To Wear.  So I know that one of the worst things for a big guy to do is wear even bigger clothing..so I ended up looking huge in my shirt. (Hey it's all about the look people).  I got on the bike and hit the gravel road.  I thought I had flatted since the bike was so squirrely and then almost went down. Luckily I kept myself upright and was off to the bike course made for a "midseason PR".  That race director was a lying son of a bitch. Although there was not that much elevation gain..maybe 900 feet..the hills killed me.  The hills and the heat.  It was up and then down..up and then down.  I had two bottles of grape EFS with me along with 50 ounces of water.  I was trying to get all my calories in liquid form. I drank about 40 ounces of the EFS and 15 ounces of water and felt bloated.  The bike was uneventful except for the guy who crashed right in front of me cracking his head open and getting road rash. I would usually stop in these instances but he luckily crashed right in front of two police officers and some volunteers so I kept going.  Also on the way back there was a large dog that came out of a field and started to attack the cyclists.  It would go right for your ankles.  Lucky for me I saw the dog coming and was able to pass another cyclist putting him between the dog and myself.. Yeah that was probably pretty shitty for me to do.. 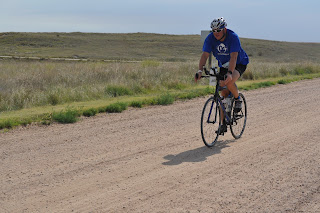 I was hoping for about 1:20 on the bike but figured I was out a lot longer than that. The bike computer read 1:36. So I was not happy but I hoped that I had at least kept hydrated. I had manged to keep my heart rate fairly low at an average of 136 bpm.

I then dismounted and changed into my running gear. My coach and I had decided that I should run with my nathan hydration vest so that I had water with me at all times. Considering the heat of the day I thought it was a good idea.


I found out two things almost immediately on the run. First, the hard packed surface was actually a fairly deep sand surface. Enough that I actually sank into it.  Second, my heart rate skyrocketed the second I began to run at any speed. A sure sign I was behind on hydration.  I drank from my vest and switched walking and running to keep my heart rate low. Unfortuantely the low was about 140 and the second I ran it went to 150 and higher.  At the 2 mile aid station I decided to try the sports drink that they had...HEED.  I wretched immediately upon taking two big gulps.  Who the hell would be handing out warm urine to drink? Worst tasting stuff ever.  Needless to say with the heat, no shade and my heart rate topping out every thirty seconds the 6 mile run was not any fun at all.  The only thing  that kept me going was the fact that if I passed out no one would find me for days..that and the fact I wanted to wring the race director's neck for his promise of a hard pack trail.

I did not hit any of my goal times for the race. I also failed to keep my hydration issues in check.  It did turn out that it was incredibly hot.  After the race the family and I went to a movie and when we got out the outdoor temp was 111 degrees.  I also have not run consistently for about six weeks due to the whole gout issue..but when I was running it was at an 11:30 mile pace for 5 miles or so with a very low heart rate.  I was hoping that this would translate into a 1:10 10k with little effort on my part. Boy was I wrong.

I need to get fit faster and that is proving difficult with the foot issues.  Further I need to drop a lot more weight.  My next race is in 4 weeks in Maine. I am debating about just doing the half aqua bike which would be a 1.2 mile swim and 56 mile bike with no run or switching to the Olympic distance.  I also need to get the hydration nailed down.

It was a fun weekend anyhow and I learned a lot from the race.