My official training for the Ironman Wisconsin begins on October 18th. That is when my coach will have my first week of structured workouts for me.  I figured I would lose some weight before the 18th and actually lost a few pounds. I was at 228 on Thursday..however the wheels fell off the bus over the weekend.  On Friday I got a call from my brother Ben. He had an extra ticket to see my beloved Badgers play Ohio State on Saturday.  The stars lined up and Ben and my wife were able to find a fairly cheap airline ticket into Madison on Saturday.  However, Friday night was my anniversary so my wife and I went out for dinner.  I had a great appetizer of cheese garlic bread followed by a spinach salad (the only vegetables I would see for the next three days) and then a blue cheese encrusted sirloin which was wonderful.  I figured I would watch what I ate while in Madison.  On Saturday Ben and his friend Steve picked me up from the airport and our first stop was The Great Dane to meet Steve's dad and brother.  Talk about a menu to die for..macaroni and cheese..brats...cheese curds and of course the Great Dane Brat and Bacon Pretzel Burger. 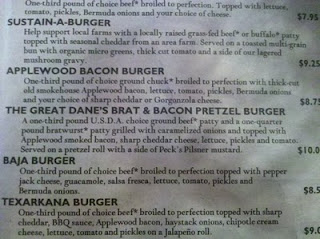 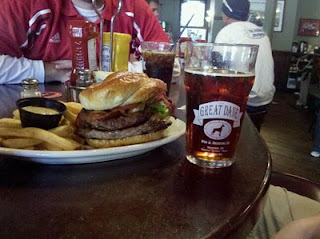 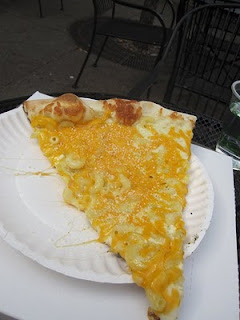 Lunch was followed by a walk to the stadium where we met my brother's friend Matt and his parents for some tailgating. Matt's parents always have a great spread of food and drink set up including chili, cheese, Capital Beer, and other assorted yummy food.  The game was great. What made it better was my parents made it up to the game which is about an hour and a half drive for them.  My mother is in a wheel chair so they have seats in the handicap section which allowed me and my brother to spend the last half of the fourth quarter hanging out with them and celebrating the defeat of the #1 Ohio State Buckeyes.  After the post game celebration was completed my parents headed back out of town and I joined my brother and his friends in walking to State Street looking for a bar to have a few drinks.  Unfortunately every bar had a line of 30 to 40 people or more and thus we kept walking. We finally found seating at Coopers which is right across the street from the Capitol Building. Again we treated ourselves to an Oktoberfest as well as mini burger and a wonderful concoction of Canadian origin..french fried potatoes covered in cheese and gravy. Somehow it was 1:30 and my brother's friend Steve was still hungry which necessitated a trip to Greenbush Bakery for donuts.  We returned to the hotel and ate the donuts before getting a few hours of sleep.  The next morning my brother, Steve and I went to State Street to buy souvenirs.  On the way there we went past Monona Terrace where the Ironman transition area is going to be.  I looked at the lake and snapped a picture so that I can have a visual image when I am swim training.  Of course we needed to stop for lunch and got a few slices of pizza at Ian's Pizza, including their famous mac'n'cheese pizza.

It is now Monday night and I just stepped on the scale.  235.6..I didn't even think it was possible to put 7lbs on in three days..but apparently it is. It was a great weekend seeing family and friends, being back in Madison enjoying familiar sites and sounds, eating my comfort foods and experiencing the great environment that is the University of Wisconsin and the people of Wisconsin.  My brother also indicated to me that he plans on doing quite a few triathlons next year so it will be fun trying to plan some races with him.  I am waiting to see my training schedule.  Should be fun.

And I can't go without mentioning the Teach Me How To Bucky phenomenon.  All around campus people were wearing Teach Me How to Bucky shirts and we were constantly being asked by people if we knew how to Bucky. Apparently no one had any idea..Finally while walking towards State Street after the game Steve saw some coeds coming towards us with the shirts on and yelled..what the f*** is the Teach Me How to Bucky?  To which the cutest girl responded..you're too old for me to teach you how to Bucky.  Harsh.  Of course that exchange was almost as good as the Badgers beating Ohio State..not quite..but almost.