About a month ago I completed my favorite race with some of my favorite people. I did the olympic distance Rev 3 Maine at Old Orchard Beach.  It is the first triathlon that I have competed in for a long time. I use the word "competed" very loosely.

The plan to do the race was very last minute. The family had some vouchers from Delta that needed to be used up and one of the only places we could head to out of Colorado was Maine. It gave me a chance to sign up for the Rev 3 race and most importantly I could see some of my friends for the first time in 2 years. (the last time I did Rev 3 Maine). Jen Small (milesmusclesmommyhood.blogspot.com) lived in Maine and Jen (seejenroerun.blogsot.com)  and Angela (http://hole-head.blogspot.com) were going to fly in for the race. I would also be able to hang out with Casey and Marc and meet some of my friends from facebook in person..JDP and Michelle.

My training had been haphazard at best. Further, the girls I was racing with..Jen and Angela..had not been training at all. Their job had taken up all of the spring and summer. So we decided to do the race together.  A novel idea, especially for a triathlon. Somehow the thought of doing an olympic distance tri on no training seemed to be an ok idea.

Obviously the first thing one should do a couple of days before a race is to use all sorts of muscle groups that haven't been used in years.  So Angela and I attended Jen Small's bikes and biceps or ..weights..or something...class. All I know was by the end of class I could not move..and came close to losing my dinner from the night before. In honor of Angela and me being there Jen made the class a team event where we were doing spinning, burpees, squats push ups.. etc.  My team won..but only because my friend JDP pulled the entire weight of the team.


After our little workout we decided that it may be prudent to do a trial swim.  Not really to work on our strokes..but to see of we could actually fit into our wetsuits. I had never actually worn my blue seventy wetsuit before. In theory it should fit. However, I knew there were going to be issues when I was having trouble getting it over my ankles.  I thus grabbed a can of trislide..basically the equivalent of Pam cooing spray...and lubricated my entire body with it.  Yes, I am sure that mental picture has stimulated a number of you..probably your gag reflexes.   With the help of some friends we were able to get the wetsuits on.  No one looks good in a wetsuit..no one..and Jen's actually had ORCA written on it.. no comment is needed.. lol.

All right I lied..somehow Angela always looks good in wetsuit..I don't know how or why but somehow she does.

On Friday we had the Glow run with the kids. By Friday I could hardly move from the workout the day before..I was in serious pain and shoving alleve down my throat.  My thighs were so sore that I had trouble standing up from the toilet.

The Glow run was fun..but more of a workout than I envisioned. I ran with Jen's son..who decided to sprint most of the way.  My daughter hung ut with Jen Small and her daughter..and somehow picked up the art of photo bombing.

After the glow run we went out to eat. Luckily Jen Small was with us to keep us from deviating from our nutrition plans.

Basically we ordered one of every type of sea creature..deep fried.

The day of the race quickly came upon us. Like I said.. Angela, Jen and I decided to do the race together. Which was interesting. I was the best swimmer, Angela the best biker and Jen the best runner.  Further, this was Jen's fist olympic distance race. I would never suggest doing an olympic distance on no training..but that is what we did.  We were going to be slow..but we were going to have fun.


At the swim start I changed my assigned wave. Instead of being in the men's Clydesdale wave I put myself in the women's athena wave. The Rev 3 people even changed my swim cap color so I wouldn't feel out of place with the rest of the girls.  The athena wave seemed fitting for me since I like to hang out with the girls anyway.  By starting in this wave Angela, Jen and I swam the entire course together. Jen struggled at times with her stoke and endurance, so Angela and I would swim side stroke coaxing her along the way.  Jen was actually very comfortable in the water..and if she would have stopped talking during the swim we could have shaved 25 minutes off our time..Just kidding Jen!!!  We would have only shaved 15 minutes off.


We were the last swimmers in..thus the kayaks pretty much gave us an escort.  As we approached land Jen cramped up. She started getting concerned (whining) about her calves cramping and not being able to walk or finish the race. Angela gave her words of encouragement..and so did I.  I think my words were..stop whining and get out of the water..I am going to count to 5!


Once we were out of the water everything was smooth sailing.  We had all gotten through the swim and any sharks in the area obviously decided I was too big to try and eat.   Since our bikes were the only three left in transition it was easy to find them. 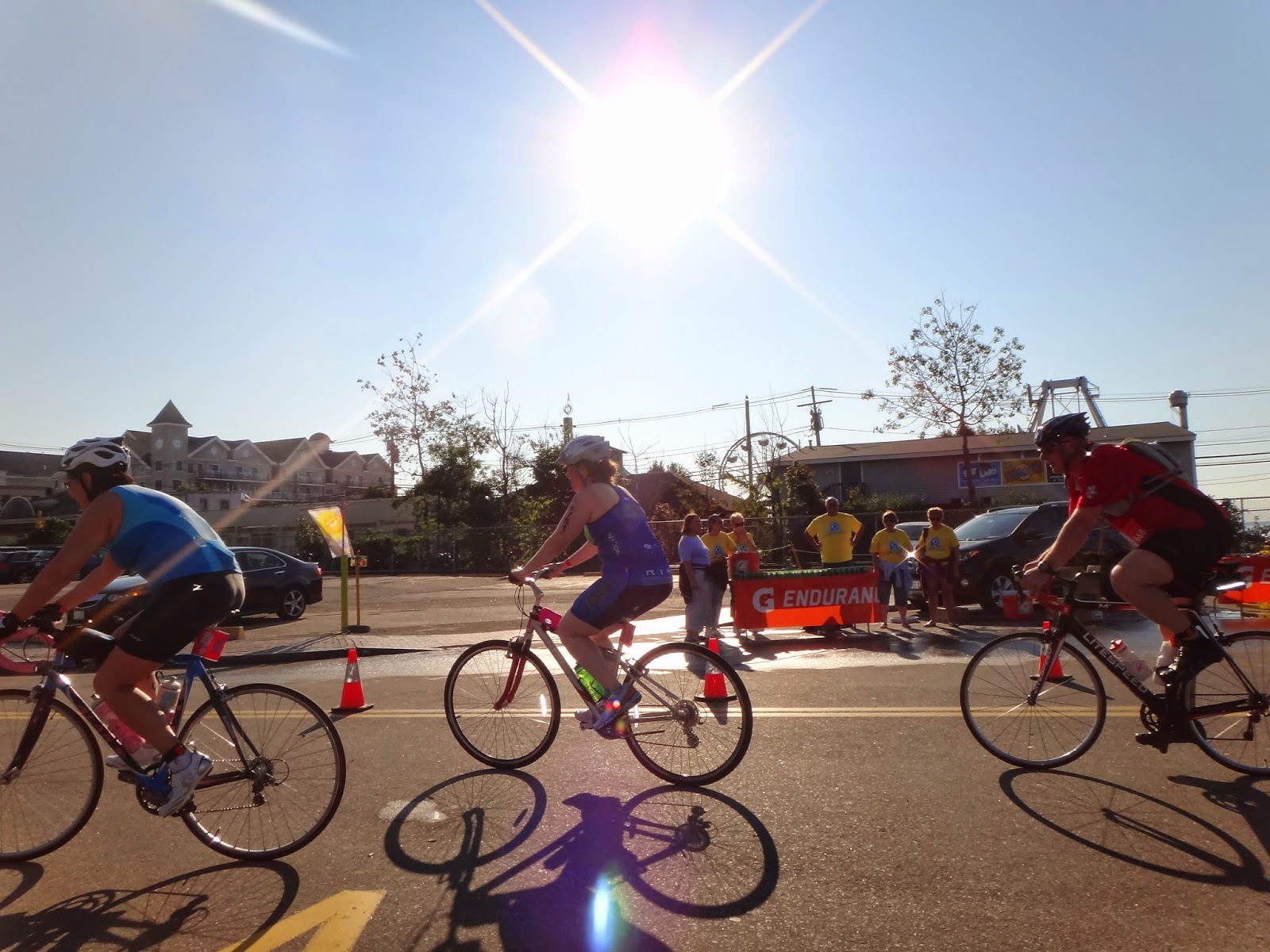 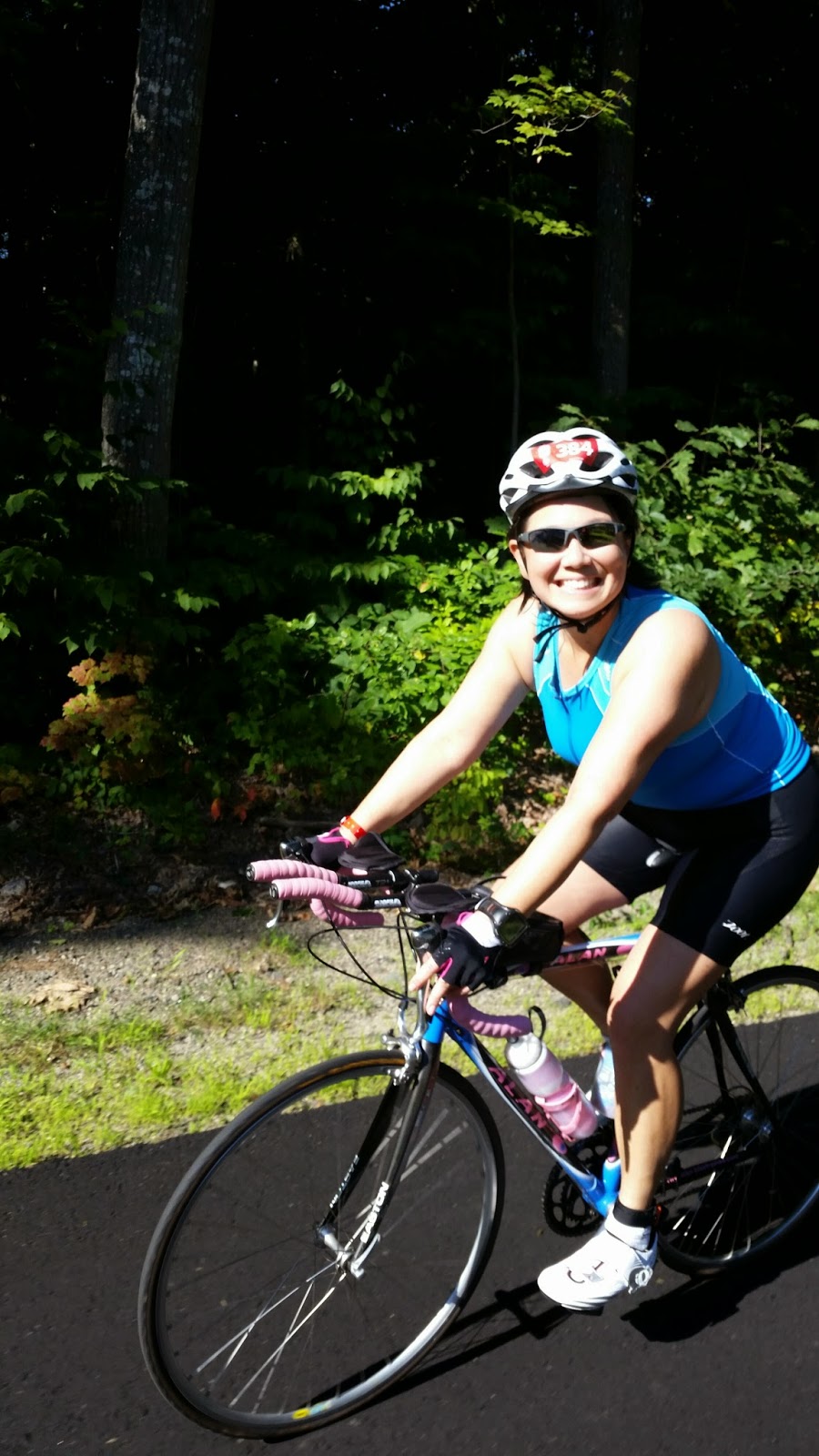 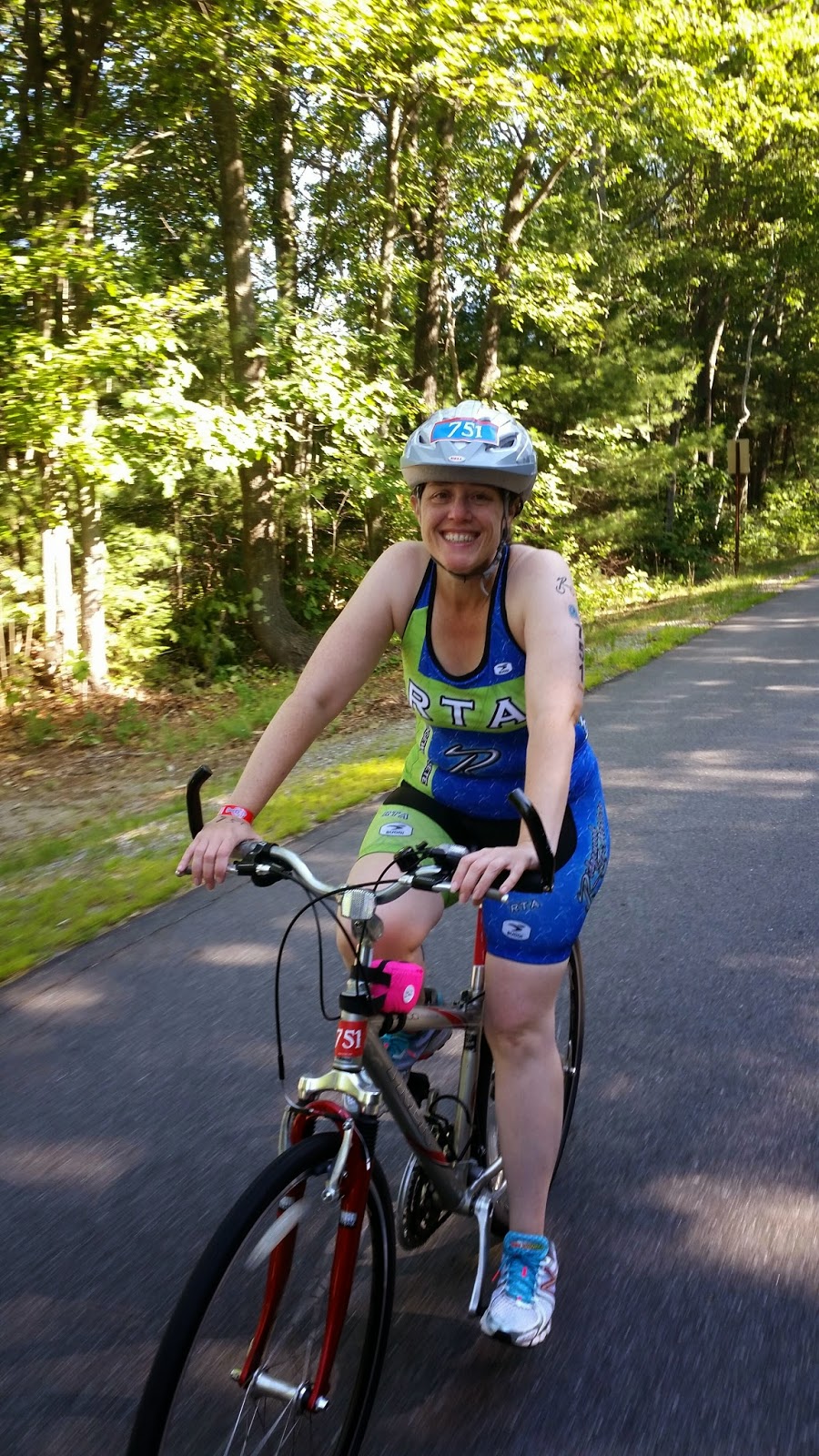 The ride was nice and fairly flat. Even though we were last we had plenty of company on the roads since the 70.3 mile race was using the same course as we were.  Obviously our pace was not too fast since I actually took pictures on course..lol.  However, at one point Angela and I were actually moving pretty good..and we were drafting off of each other.. a no no.  As I tucked in behind her I heard the sound of a motorcycle and when i looked back..it was the referee holding up a yellow card.  Seriously! I am in dead last..and getting a penalty for drafting?  When I checked the race results later on I noticed there was no penalty assessment. My guess is that they saw the O for olympic on my calf and realized how slow I was and did not want to add insult to injury.

Once done with the bike we donned our running gear and headed out for our 10k run.  Jen and I sang songs ranging from the Violent Femmes to John Bon Jovi.  I hate John Bon Jovi..but I played along.  I even did my "ice bucket" challenge at one of the aid stations as Angela filmed it.


The day had actually gotten fairly hot and believe it or not I was having hydration issues. So I actually had to start using salt pills and was downing about 16 ounces of water at every stop.  It dawned on me that if I would have been really pushing this race I would have had some serious issues. I had gone through 70 ounces of water on the bike and was still dehydrated.

After run/walking the course we came to the finish line and went over it together. 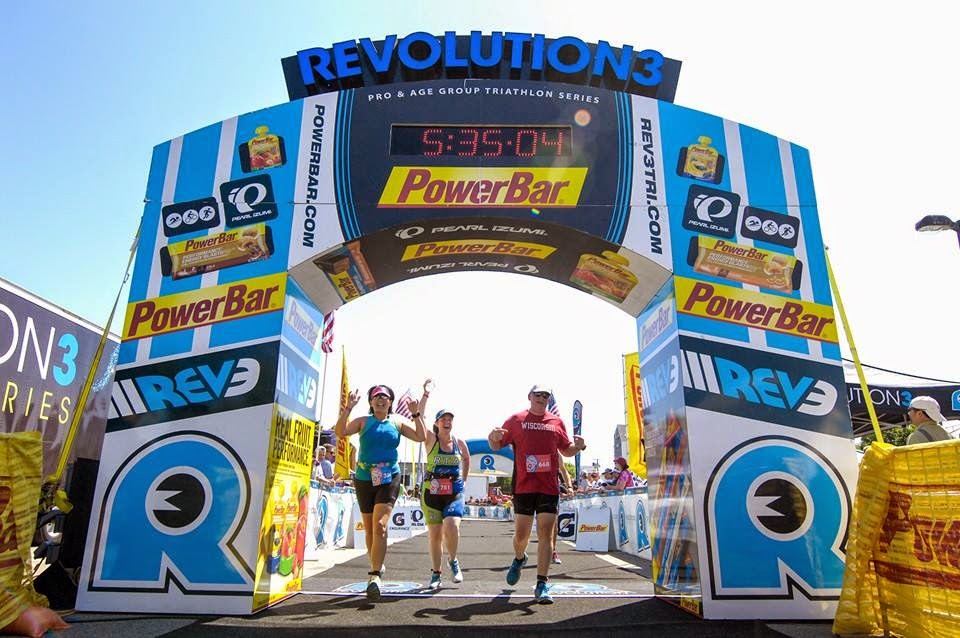 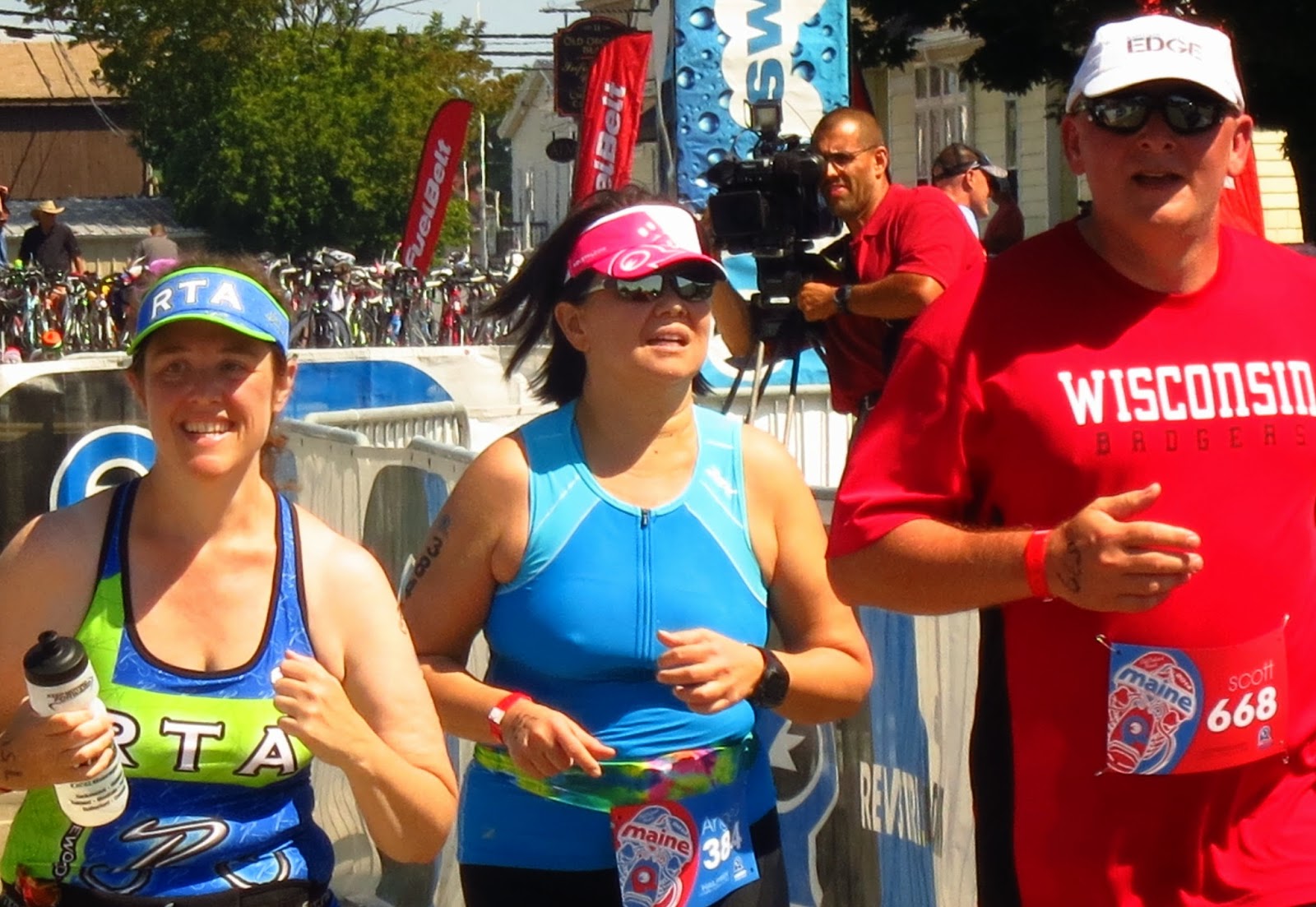 I can honestly say that even though I did a minimal amount of training this was the most fun I have had racing ever. The fact I did the entire course with Angela and Jen was wonderful.  I have never laughed or talked so much.  It was so much fun..that Angela and Jen convinced me to race in Palm Springs on December 9.  Angela and I are doing the half..which means I will actually need to train..and watch my nutrition.  There is no faking a 70.3 race.