Thanksgiving is over and so is the eating and sitting around.  Since I raced Wisconsin I have watched my friends compete and kill the courses at Kona, Florida, Arizona (Yeah Christy) and today again at Cozumel (Sonja at www.gosonja.com.) Actually Sonja just finished at a crazy fast 10:00:33 and second in her age group..guess she will be going back to Kona again!  I have also been reviewing potential races for next year, talking to my friends about their plans and trying to get a grasp on how 2012 will shape up.

I have been putting off the formal training schedule but need to get back at it.  I spoke with Doreen and she does not plan on an Ironman next year but to focus on speed and shorter courses.When I say short I mean 70.3s.  Her objective is to qualify for the long course nationals..something I am sure that she can do. I am excited for her but sad for me since that means my really long rides and runs this summer will be without Doreen simply because she does not need to put the mileage in.  I am hoping I can find another training partner in those summer months that plans on doing Ironman Louisville or even Florida so that their training mirrors mine.

I also downloaded The Big Book of Endurance Training and Racing by Phillip Maffetone in order to help plan my season.  The book is very interesting.  Maffetone's theory regarding training is to do almost all the aerobic base training at a very specific heart rate.  In general that heart rate is 180 - your age.  There are some other factors which will either add or subtract from the heart rate such as fitness level, years of training, injuries in the past etc..but the 180- age is the starting point.  My heart rate is 135.  The vast majority of my runs and bikes would be done at the 135 with very few if any aerobic sessions.  Maffetone believes that training at this heartrate, which is below anaerobic, will build a huge aerobic base which will make you faster.  In fact, he recommends doing MAF testing quite frequently to judge the improvements.  A sample MAF test would require a person to run 3 miles at exactly their specified heart rate.  You would keep track of the mile times and the overall time.  In theory, every time you take the test you should be running the 3 miles faster at exactly the same heart rate.  If that does not happen the athlete should look at what issues are keeping them from improving..i.e. over training, injury, sickness..etc.  I am still putting my schedule together but I think I am going to try his theory for a month or two and see how it goes.  I am going to stray a bit by putting strength exercises in a couple times a week since I really did feel weak toward the end of last season.  Maffetone frowns on anaerobic exercising during the base period including strength training.

The book is big and contains a lot of information.  There is also a lot on nutrition as well as training.  One thing that Maffetone suggests is taking a two week test in which you cut almost all carbs from your diet as well as processed foods and sugars.  This is not a lifestyle change but a chance for you to see how your body reacts to cutting the carbs out of the diet.  He believes that a lot of people will see dramatic weight loss in those two weeks as well as improvement in their MAF test and generally feel better.  I am going to take this test starting Monday November 28 along with a few other people I know.  I will follow the diet and let everyone know how it goes.

One last thing, Our volleyball team won the City Championship!! A shout out to my friends and teammates, Kristine, Angie, Melissa, George and Matt. We lost one game all season and swept the tourney..although there were a couple of very tough matches. 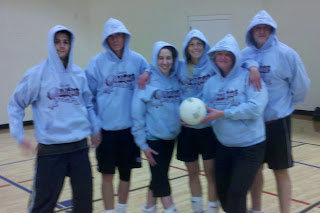 Yes..we really are that gangsta.  I wish I had a better picture but unfortunately about an hour later as we celebrated our victory at a local drinking establishment, our car was broken into with the culprits taking Kristine's volleyball bag which contained our shoes, balls, camera and my wedding ring..along with my tri bag which contained my garmin, mp3 player etc..  I am still waiting for the insurance company to get back to me on how they are going to handle the loss.  We will see if I give them a good or bad review.
Posted by Scott at 4:58 PM